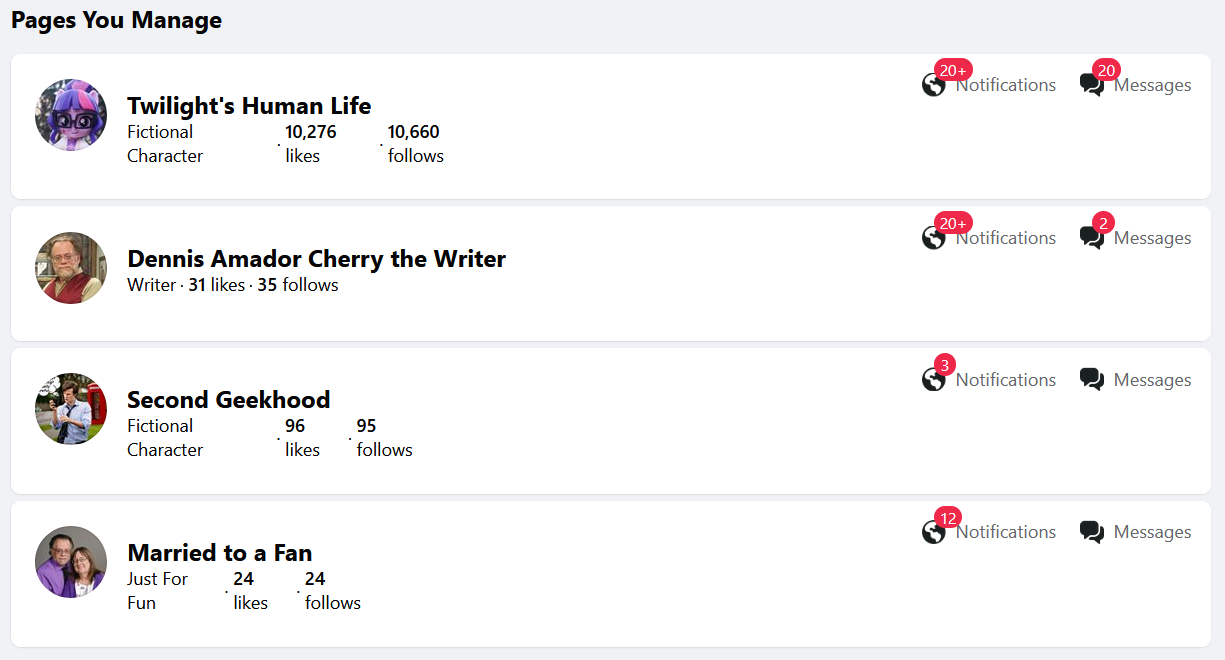 I created this blog and the associated Facebook page to promote my writing and to let people get to know me.  That’s why I write on all kinds of subjects that interest me from cooking to Star Trek and My Little Pony to my experiences with the Greater Los Angeles Writers Society.  These are the kind of things I talk about with my friends when we get together.

But sometimes I don’t get how some things work – like Facebook.  Like how one page can have a lot of followers and others don’t.  First off, I don’t pay to promote my pages.  I want this to be organic.  So let me start with my personal page.  I have 296 friends.  These are people I actually know, that I want to keep in contact with.  I rarely accept a friend request from someone I don’t know unless it’s a friend of a friend.  So 296 is totally understandable.

Kris and I started this page because we are a fan couple and we know many other fan couples.  Some are funny, talented and flat-out amazing.  We’ve seen couples in costume, couples proposing and even having genre weddings.  We created this page on March 22nd, 2020, to invite other couples to share their photos of things they’ve done at cons.

And then there were no cons.

So it’s not surprising that this Facebook page has only 24 likes and 24 followers.

Next is SECOND GEEKHOOD  https://www.facebook.com/secondgeekhood

This was about finding your inner geek.  Rediscovering the fannish things you loved as a child.  In AFOL terms, it’s like coming out of your dark ages – the period of your life when you stop collecting Lego as a child to when you rediscover it as an adult.  It was also created as a follow-up to our show on Krypton Radio, the Corsair’s Closet.  It’s been about two years since any of us have contributed to the page, so it’s not surprising it stands at 96 likes and 95 followers.

I started it on April 27, 2014, then didn’t do anything with it for a couple of years because I ran out of ideas to write about.  Then over a year ago, I rededicated myself to writing a blog every week, but I decided not to write just about writing, because then I would only attract writers.  I wanted to attract readers.  So using the principle of Know, Like, Trust, I started writing about all aspects of my life, not just writing, so people could get to know me.  31 likes and 35 following.  Okay, so I’m still working on it.

And then there’s the first page I created here.   https://www.facebook.com/TwilightsHumanLife

10,276 likes, 10,660 following.  I created this page back on December 25, 2016, because I’m a big fan of My Little Pony Equestria Girls and I collect the EQG minis dolls.  I like to play with them and set them up for pictures.  The thing is it takes time to set up the pictures, then photoshop the word bubbles in (I’m no expert).  And as I took my writing more and more seriously, I had less and less time to do this.  The fact is that I haven’t contributed to the page since July 4th, 2018, yet it outdoes my other pages by miles!  I guess I’m not the only one who loves and misses the show, but still, I haven’t contributed to it in over two and a half years!  I don’t get it.

I guess I’ll have to do some research into that…

Okay.  After months of study and a 2.4 million dollar research grant from the Federal Infrastructure Bill, I have concluded that the Equestria girls are more popular than I am.

Can’t argue with that.

By the way, when I say I created these pages, I mean Kris actually did the tech work.  She’s my IT Department and web designer:  https://civicsitedesign.com/

You think anyone will figure out I’m also using this post to promote my other pages?