The Holiday Season, a Perfect Time to Lose Weight. 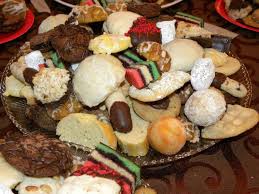 Around this time of year, many people worry about gaining weight.  They worry that the extra cookies and candy will increase their waist size.  In order to avoid this, they curtail their enjoyment of holiday treats, thereby also curtailing their enjoyment of the holidays.  But the idea that holiday goodies adds to your weight is nothing more than an urban legend, an old wives tale that have been passed down through the generations.  People who believe this are missing one simple scientific fact:

So here is how you can lose weight during the holiday season:  Instead of eating holiday treats as a separate snack, incorporate them into your meal.  If half of your dinner is Christmas Cookies and chocolate Hanukah gelt, then your dinner is only half the calories it normally is.  Do that from Thanksgiving to the Day of the Three Kings (January 6th) and you could lose some serious poundage.

Here are some substitution examples to help you get started:

Soon, you will find many other substitutions to cut your calories in half!

But there is a danger you should be aware of.  Some people have been known to gorge themselves on nothing but holiday treats, thus their caloric intake is zero.  These people waste away to nothing and starve to death – although they do have a holly, jolly Christmas doing it.  Like all other dietary considerations, moderation is the key.