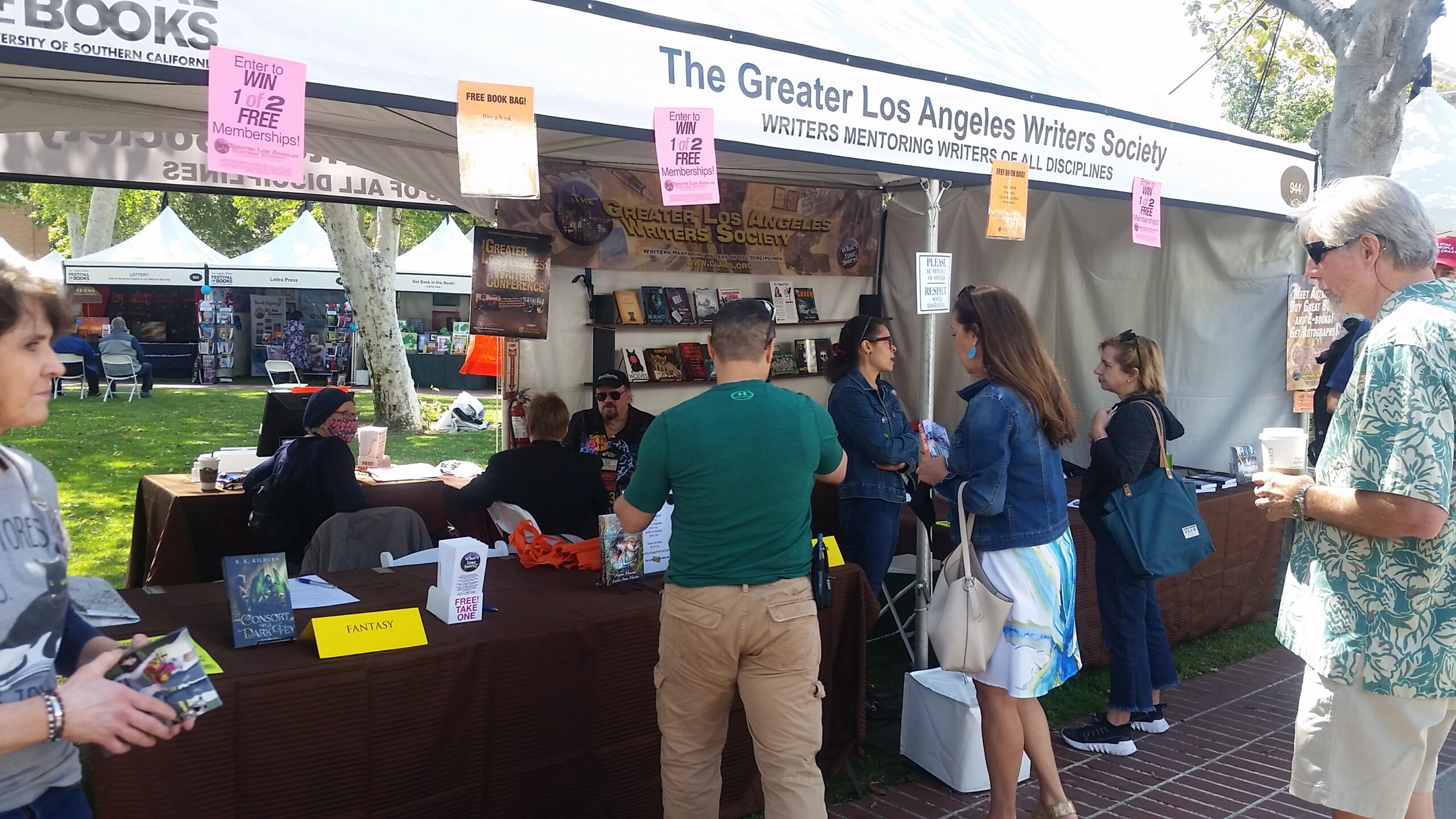 It’s been a week since the L.A. Times Festival of Books, and I’m recovered enough to write about it.  Actually, it wasn’t that bad.  The LATFoB had been canceled for the past two years because of Covid.  This first year back there was about 75% of the crowd of the previous years.  The festival was held at USC.  Our booth was on the main street, near Tommy Trojan.

Both mornings the festival started with the USC marching band on the USC stage, which was also two booths down from us. 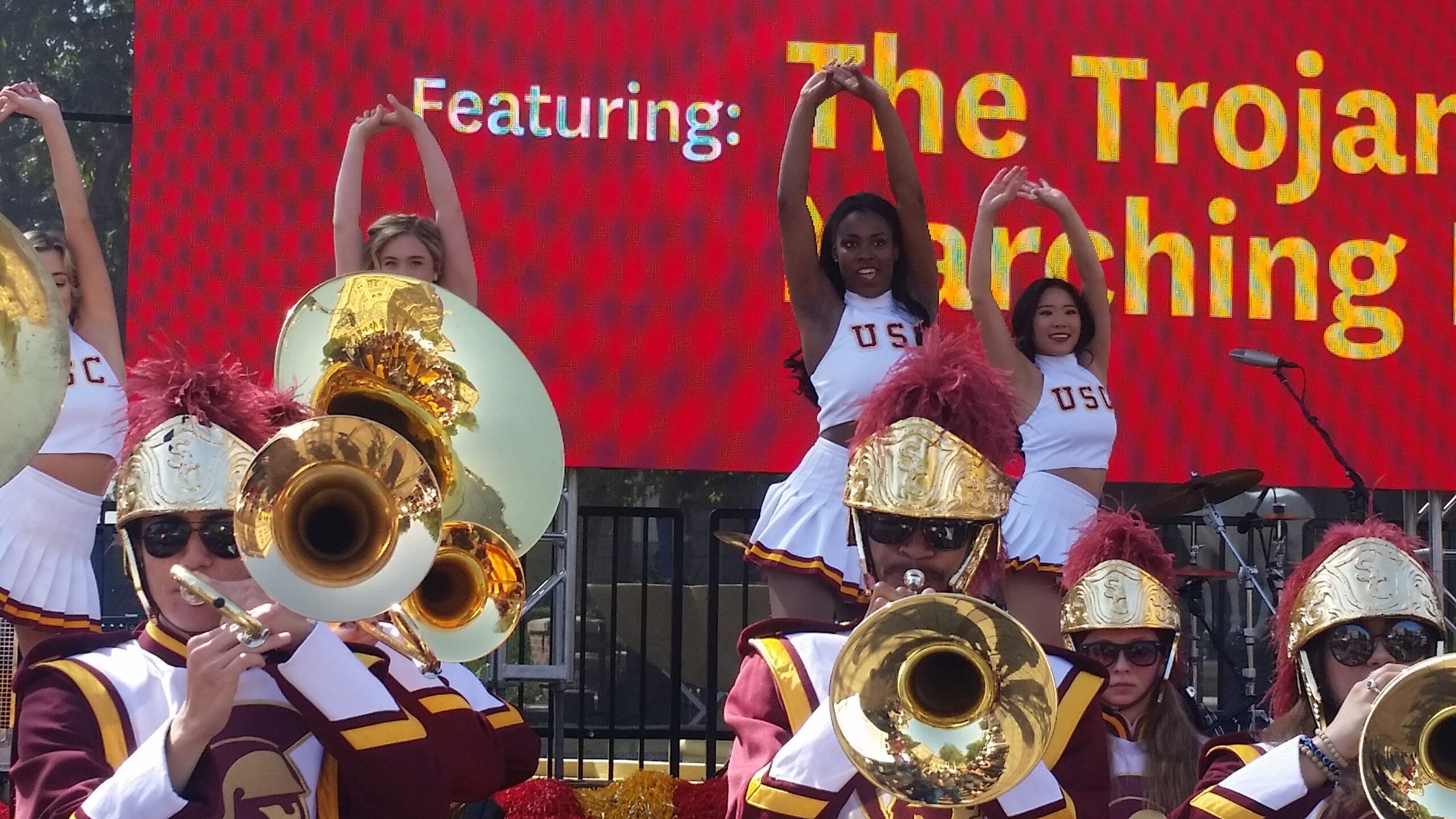 At the front of the booth, we had various GLAWS authors selling and autographing their books.  The genres ranged from children’s books to sci-fi/fantasy to historical fiction. 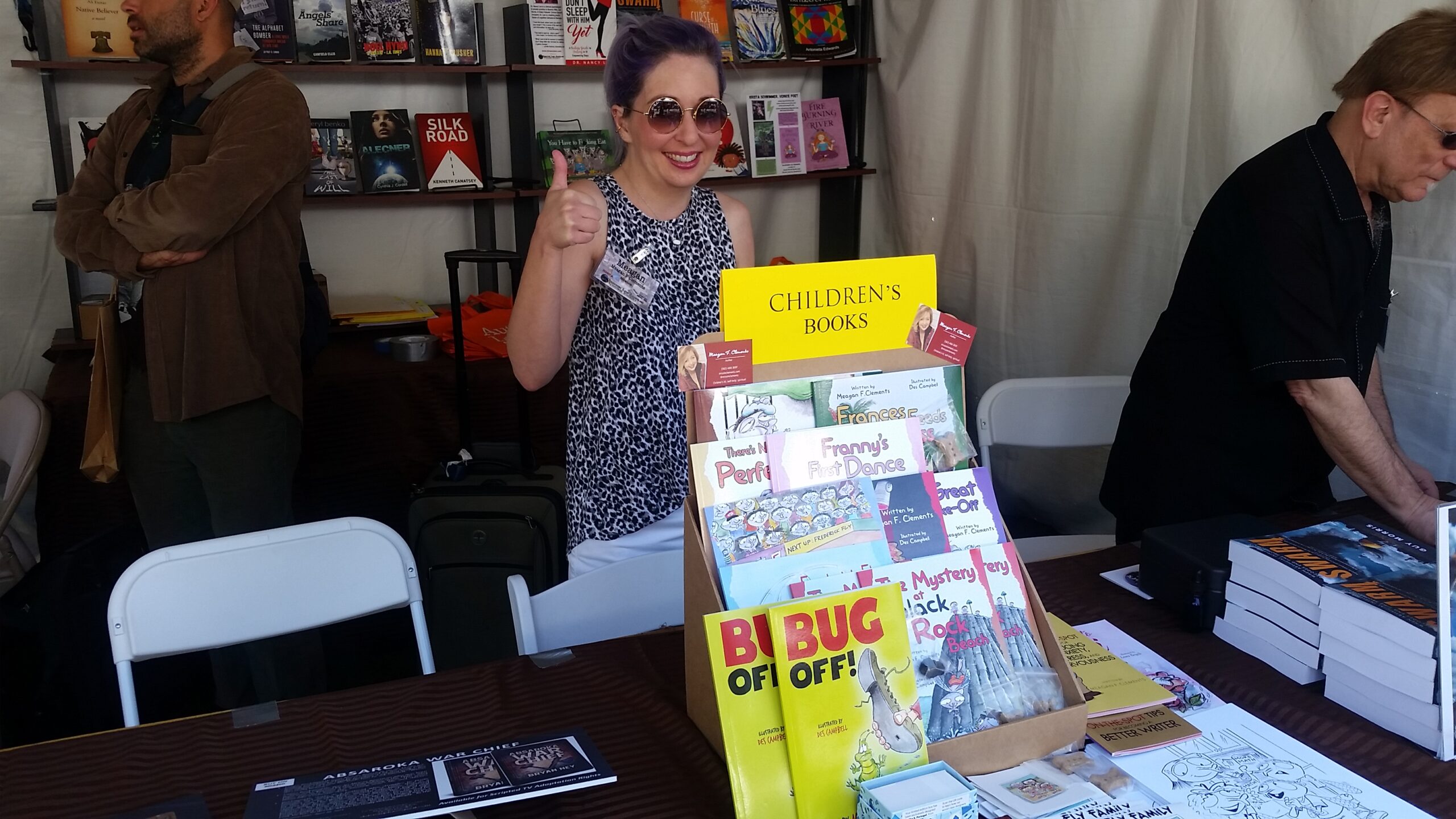 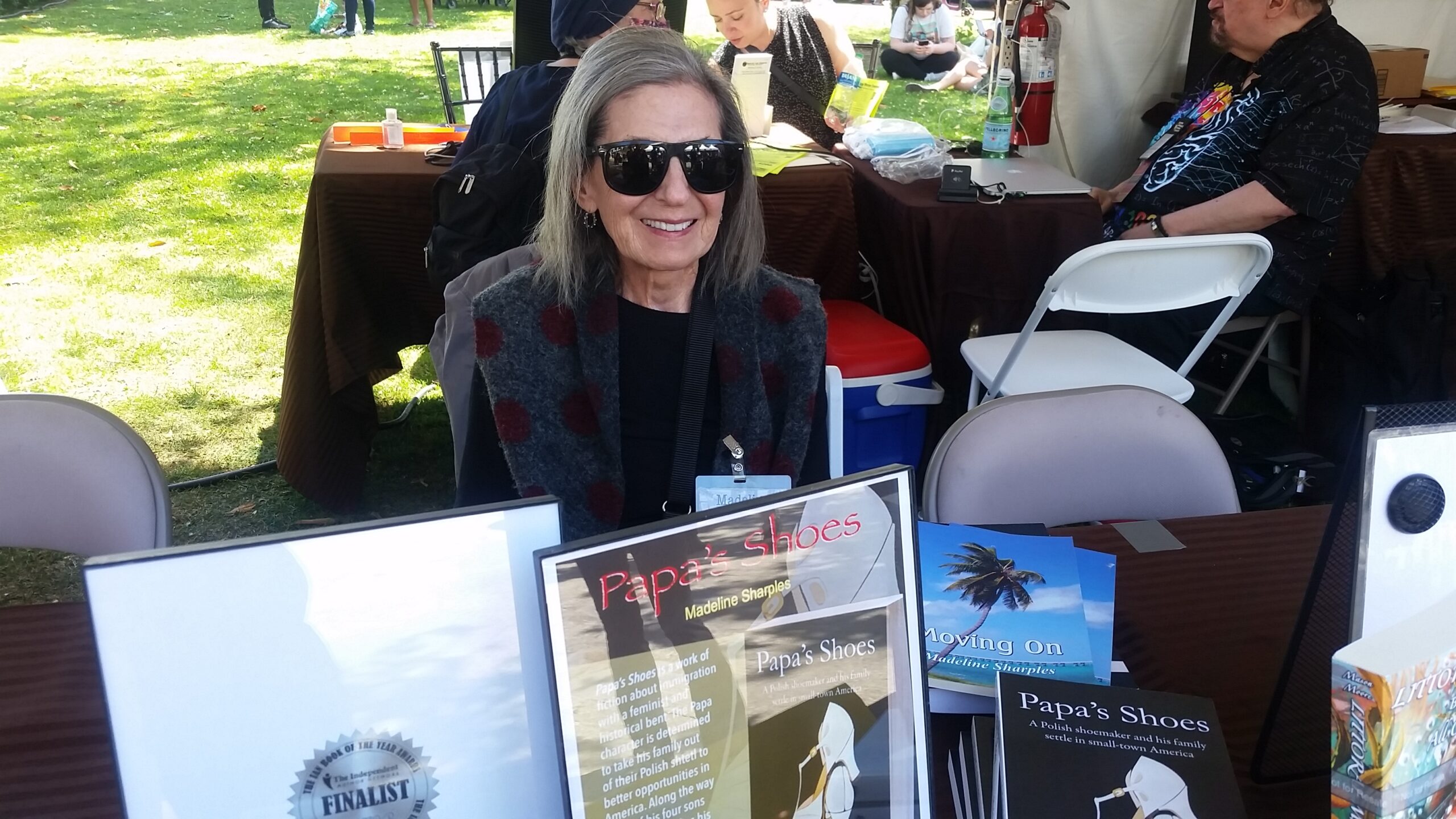 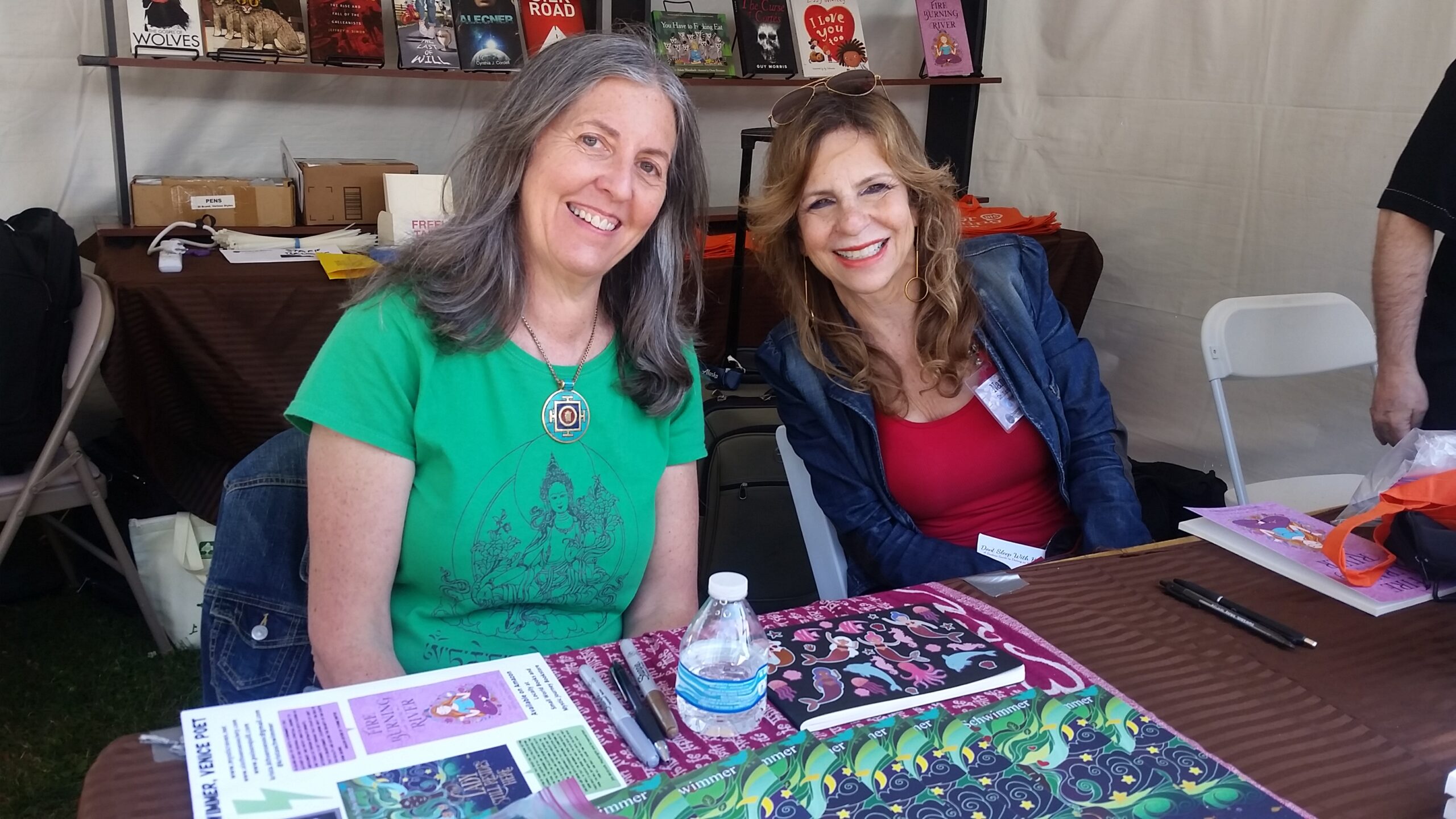 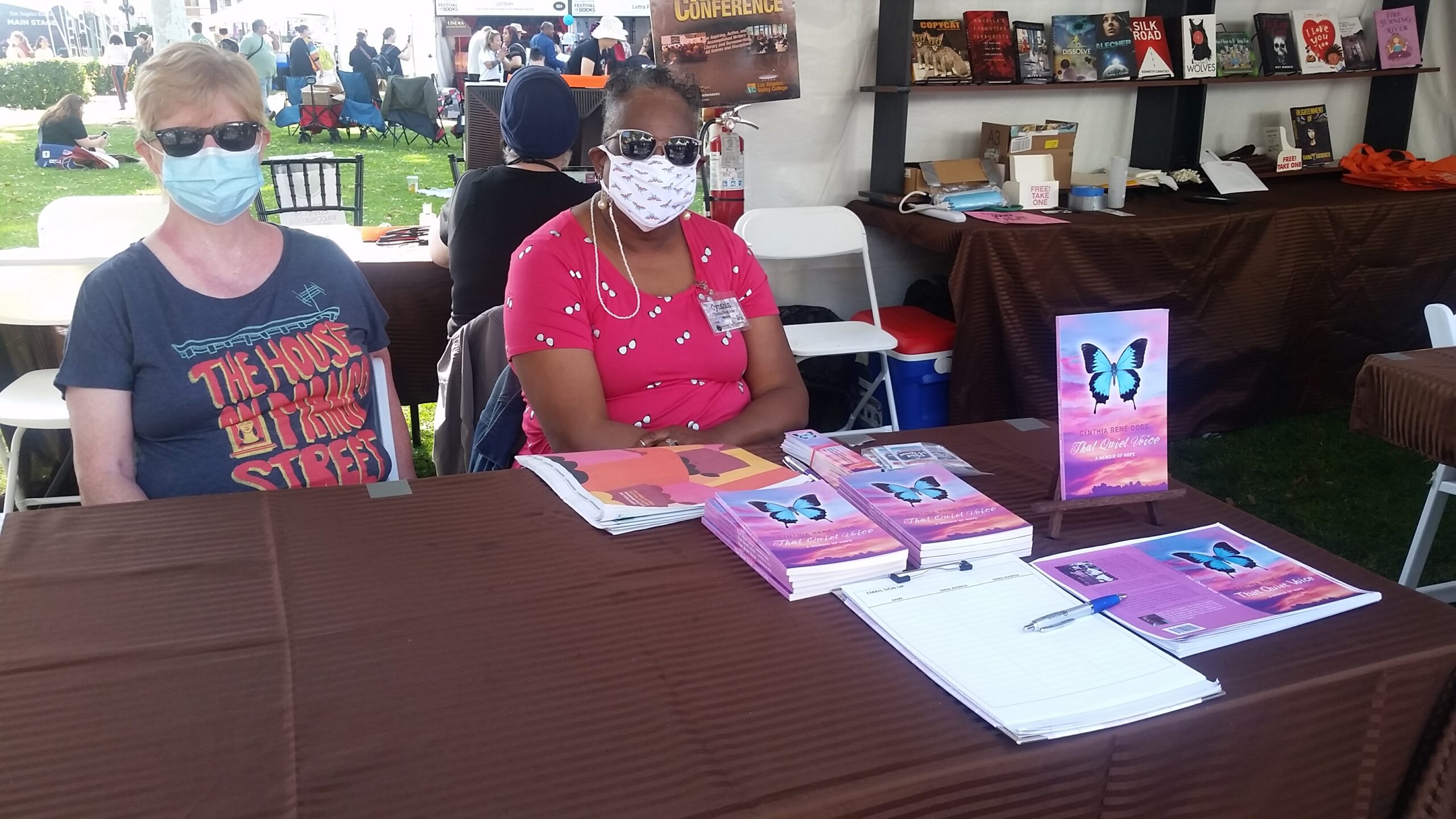 The authors reserved time at the booth ahead of the festival and would rotate every two hours.  We had a few cancellations and a few just didn’t show up, but those who did appear seemed to have a good time meeting people.

We had a display in the back with books from each author that would be appearing during the weekend. 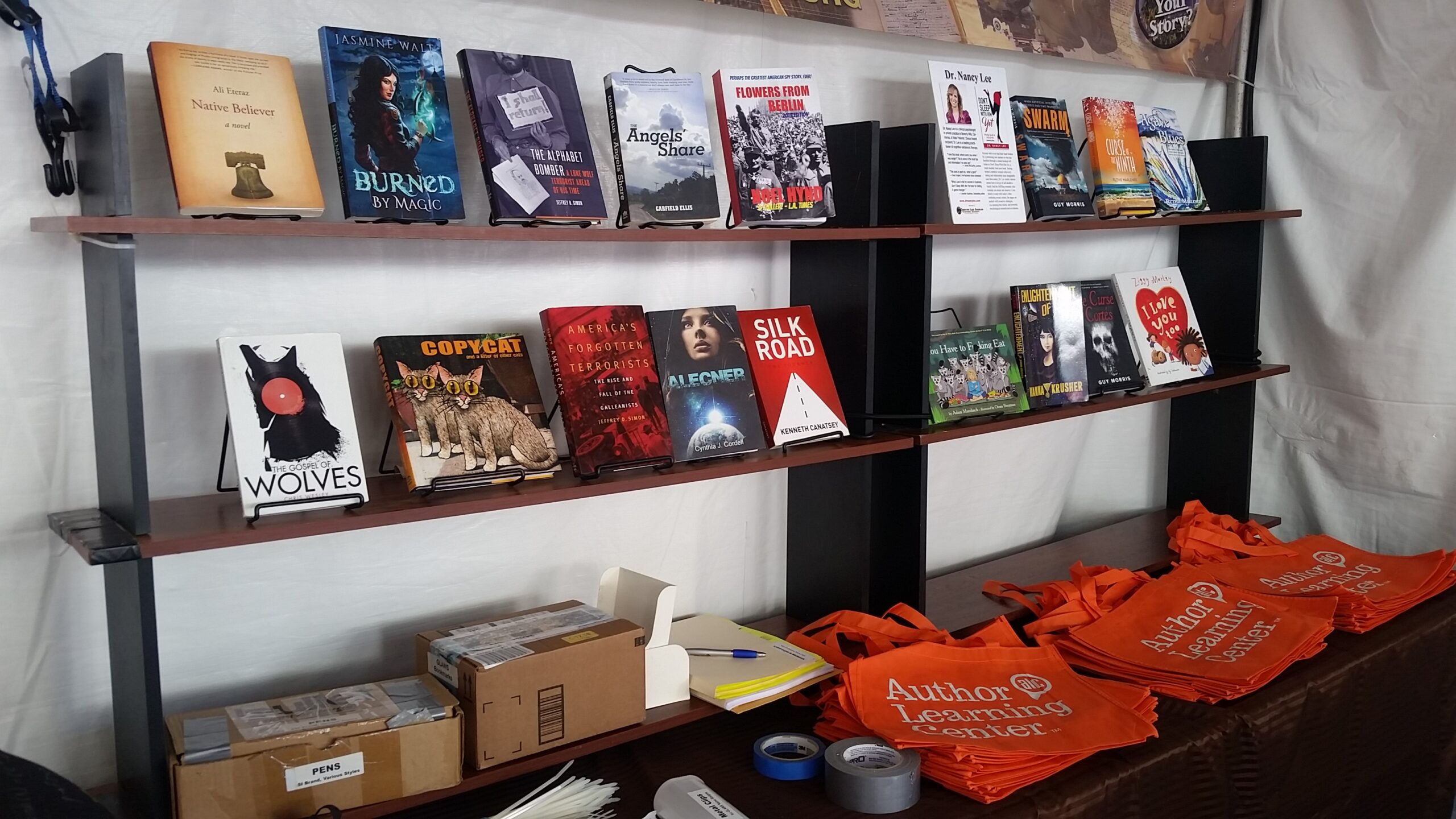 In the back, we would sign people up for our email blasts, answer questions about GLAWS and tell them about the benefits of membership.

Sunday was less busy, so I was able to step away and do some networking.  I stopped by the Black Chateau booth and spoke with Desiree Duffy.  Black Chateau is a company that does Public Relations for books and I will need them when my book is ready to publish.  I stopped by to find out when I should officially contact them to prepare a campaign. 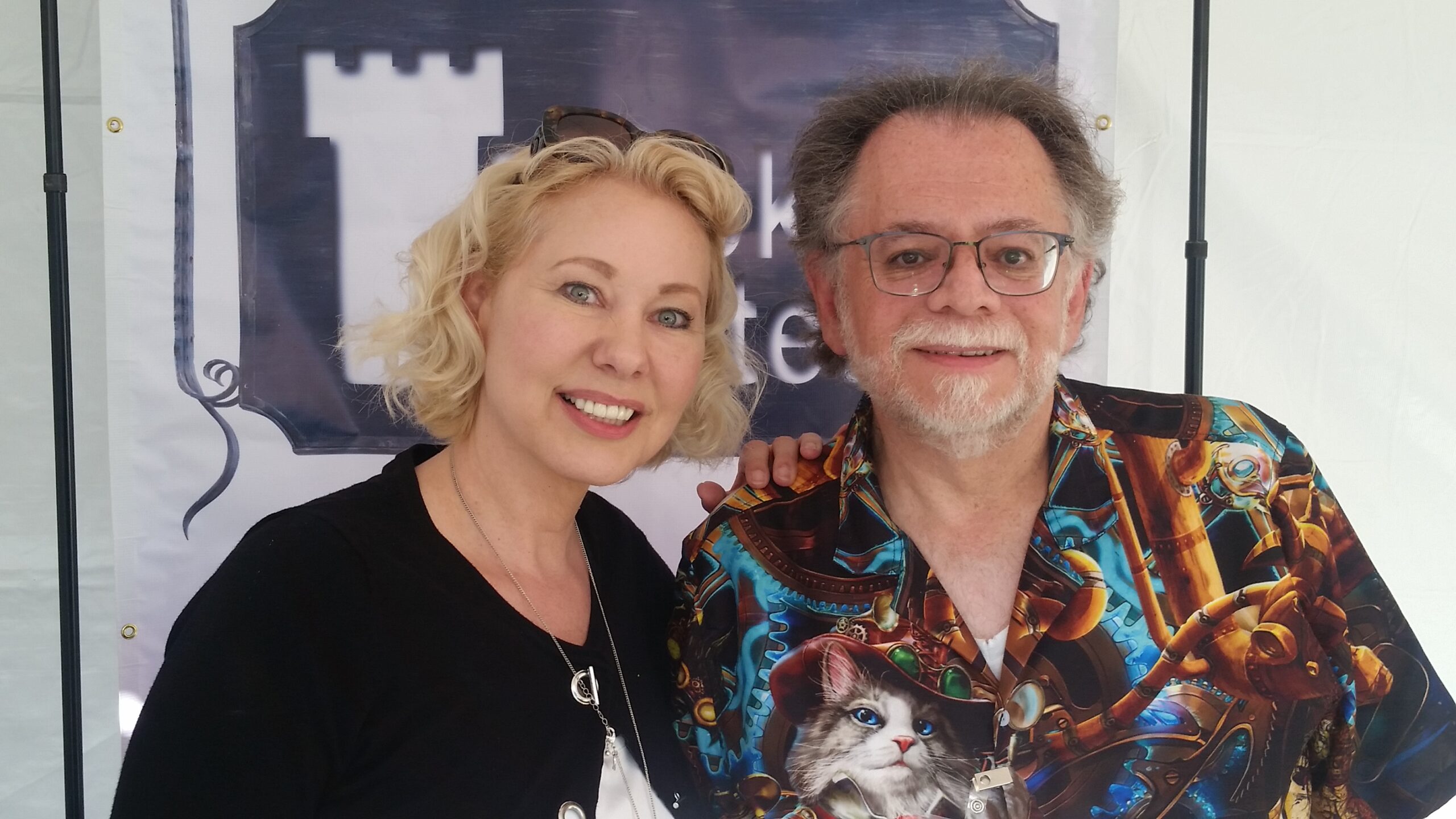 I also stopped by Whimsical World books to see Sheri Kent and Derik Taylor Kent.  Though they write children’s books, a vastly different genre than mine, I find their creativity inspiring. 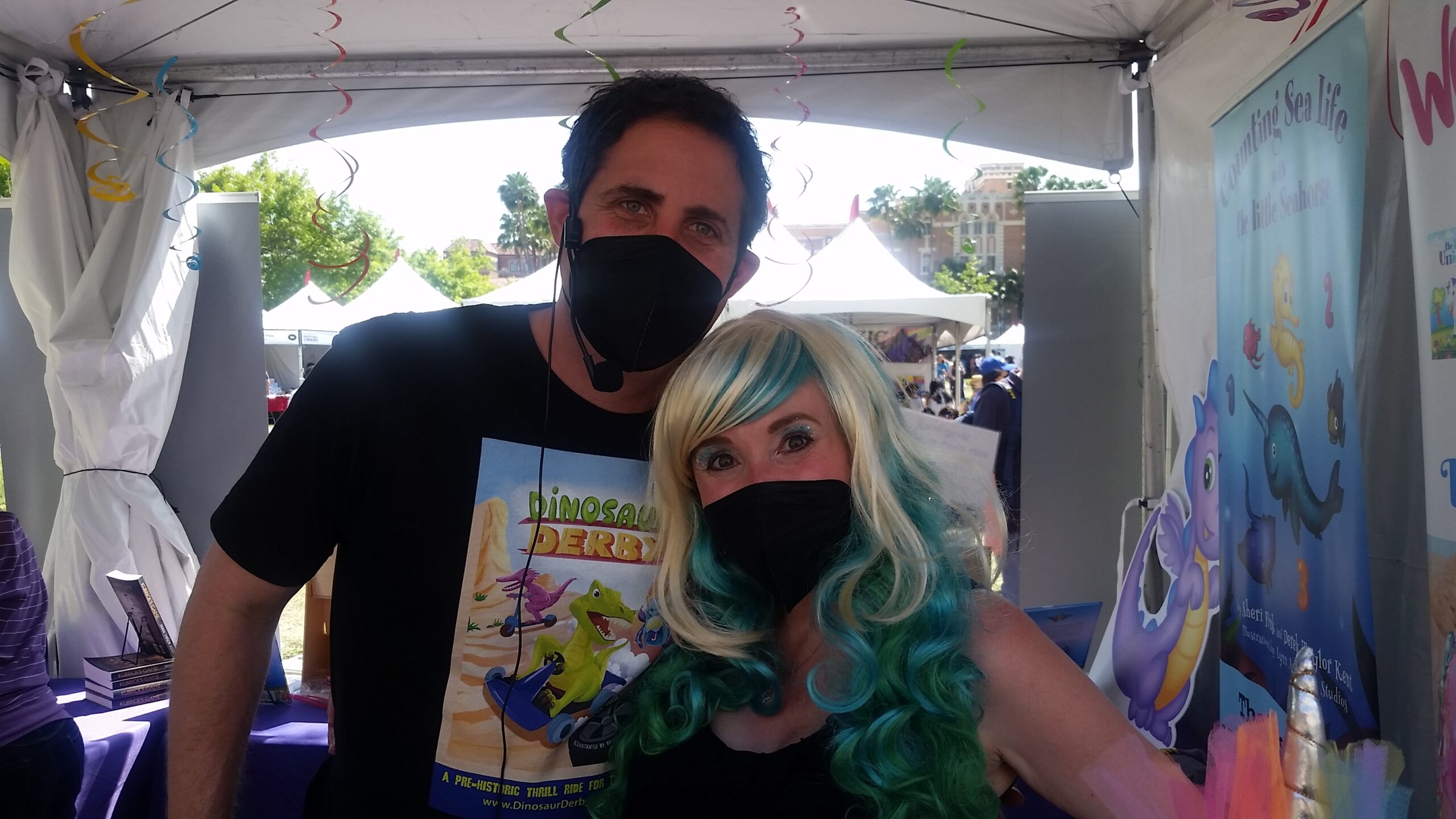 And, of course, I had to say “hi” to the vice president of GLAWS, Nic Nelson of Wordsmith Writing Coaches.  He was easy to find.  He was in a booth right across from ours.  All weekend long, we were directing people to each other’s booths.  He’s the one in the blue shirt, sitting with one of his authors. 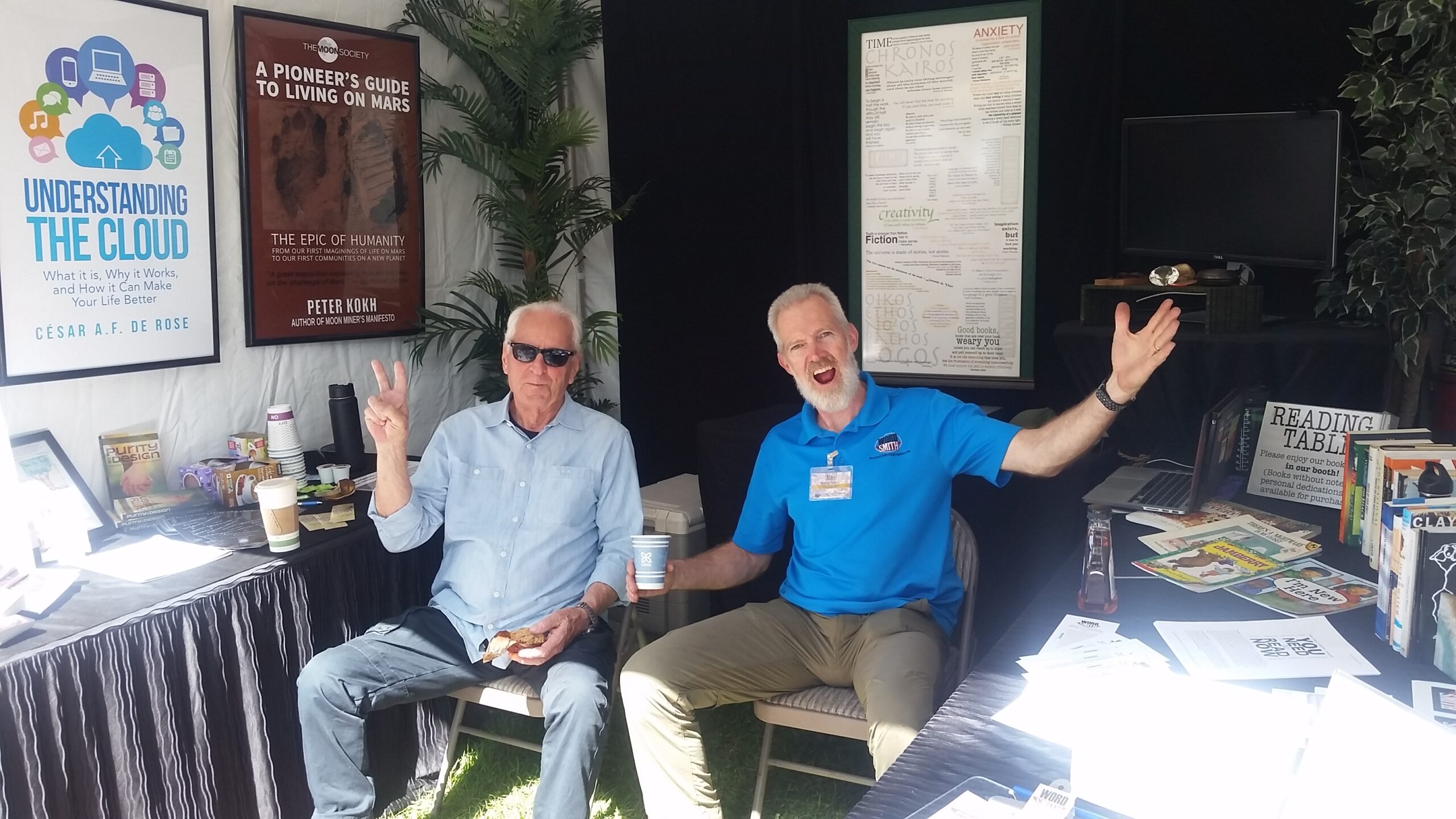 The festival also had some food trucks, including our favorite, Baby’s Bad Ass Burgers.  http://www.babysbadassburgers.com/  Some of the lines were up to an hour-long, so I didn’t stand in line. 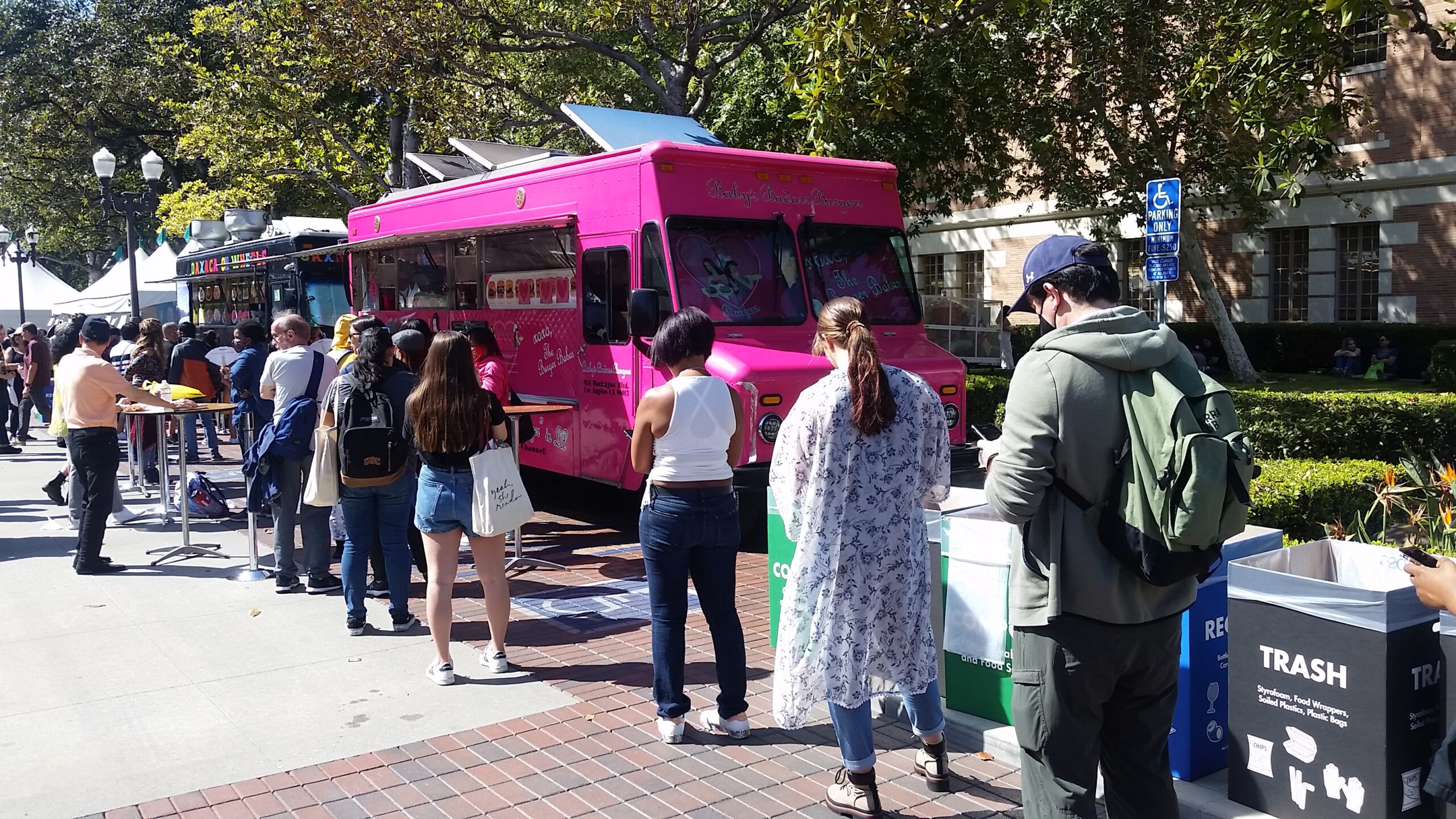 And if you wanted something sweet… CINNABON! 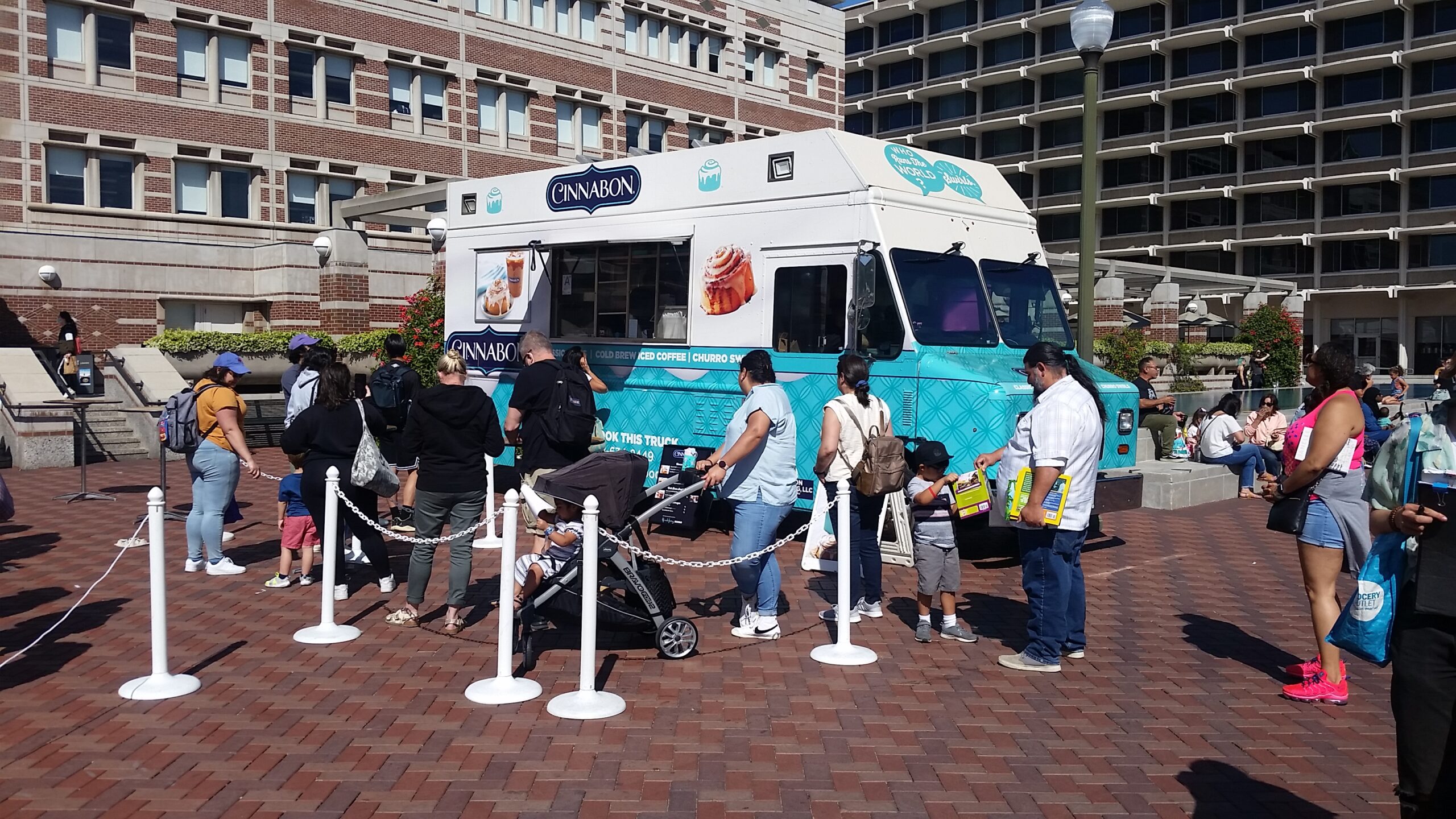 And it was on Sunday that I got together with an old friend, Liz, aka mad Woman With a Box from our Corsair’s Closet days, and went to see Alton Brown at the Cooking Stage.  I wanted to get his new book, “Good Eats #4, The Final Years”, but it was sold out. 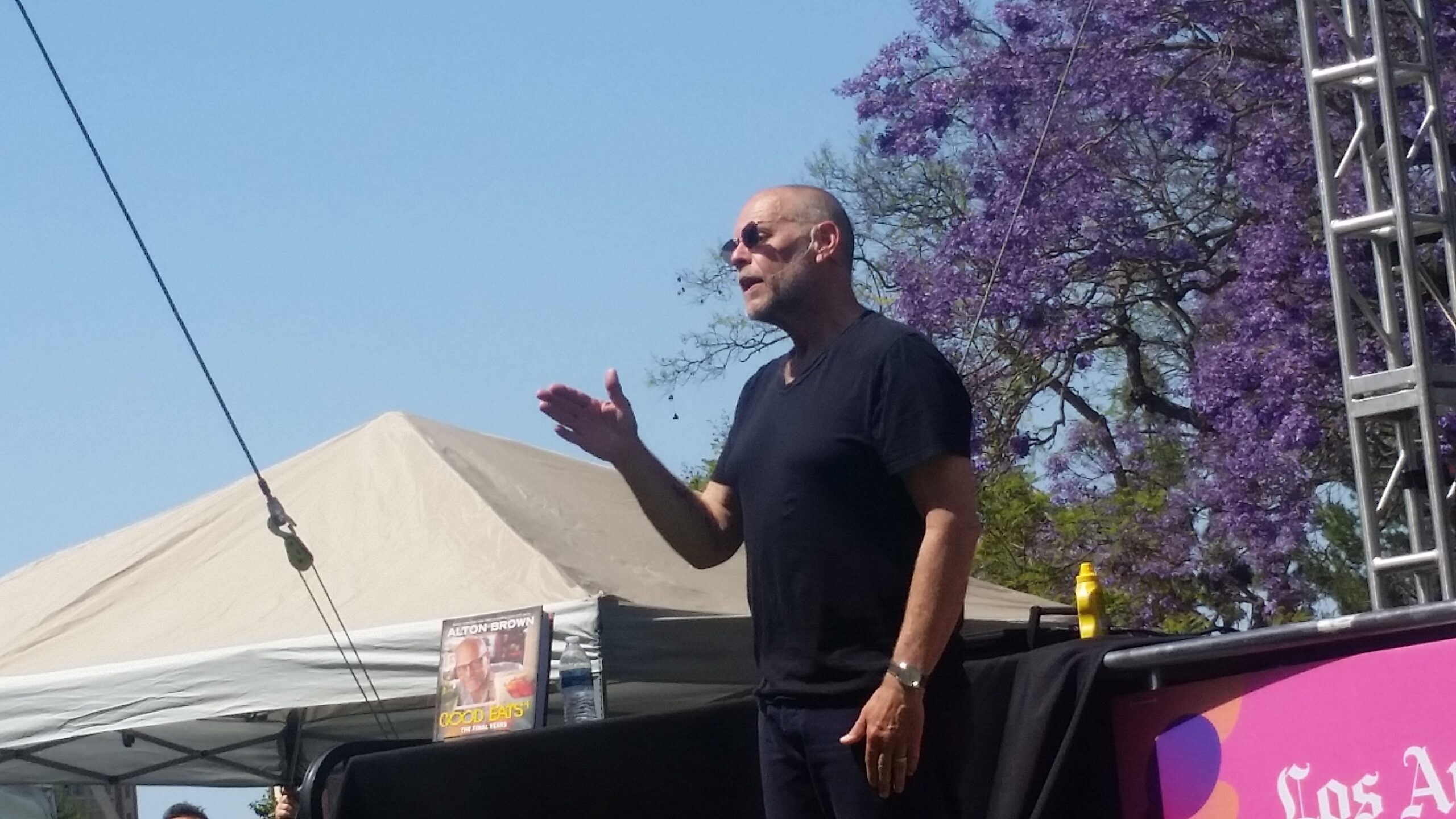 Literary agent Steven Hutson also stopped by our booth.  No picture.  We spoke about the Writers and illustrators of the Future Awards dinner that we both attended a few weeks earlier, and writing in general.  He was very encouraging about my writing and I promised him I would send him my book when it was ready.

Overall, a fun, productive weekend at my alma mater.   Great weather, controllable crowds, and finally got to see some old friends in person.

Second Steampunk screenplay:  174 pages.  <– Still working on this one. 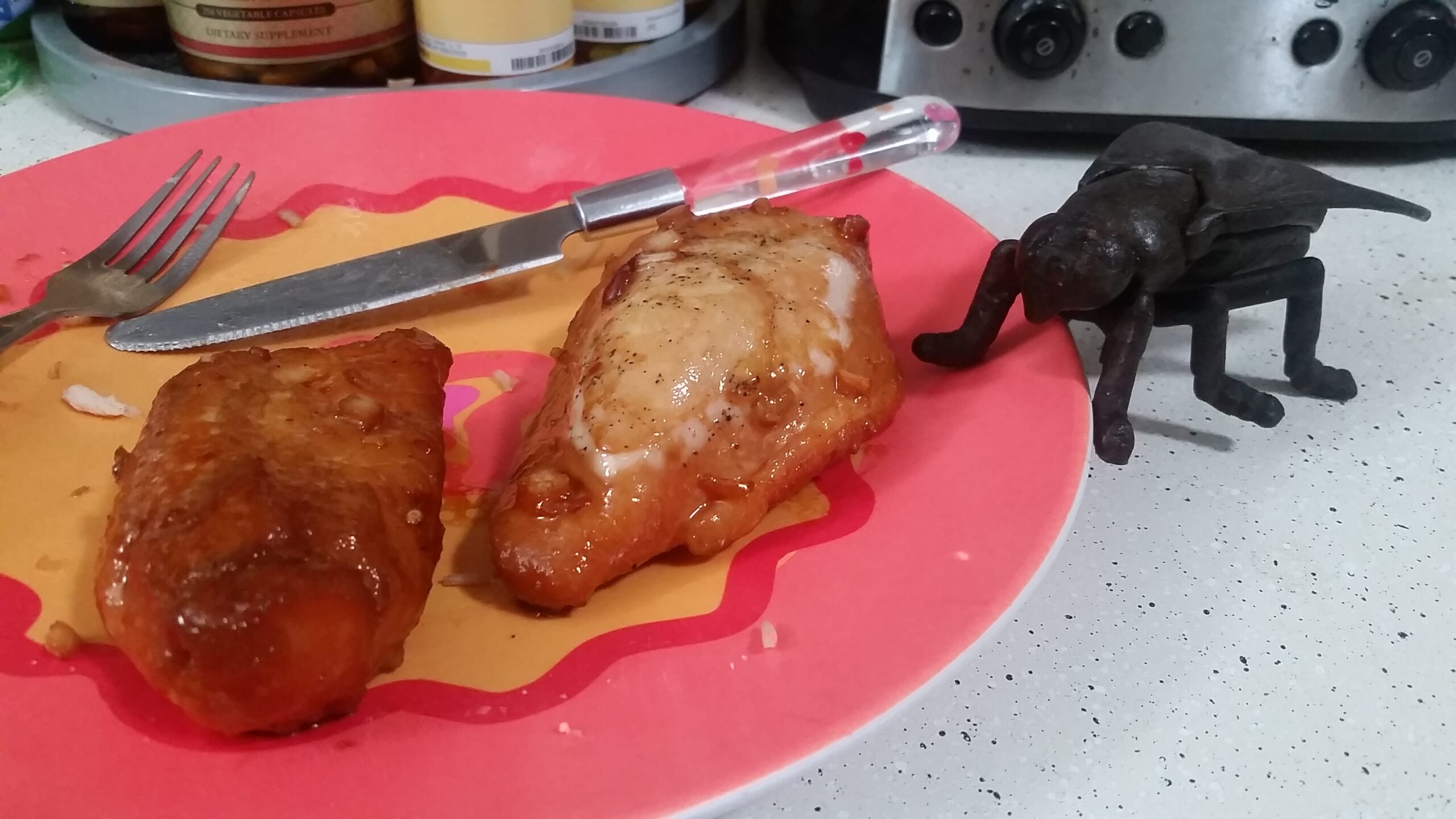 “Interestingly enough, there is no Bourbon in Bourbon Chicken.  The name comes from Bourbon Street in New Orleans.  This version is not quite Chili’s Honey Bourbon Chicken, but smooth and subtle.  Will definitely be adding this to the recipe book.” – Vincent Reinheart.