Just Yesterday in a County Nearby 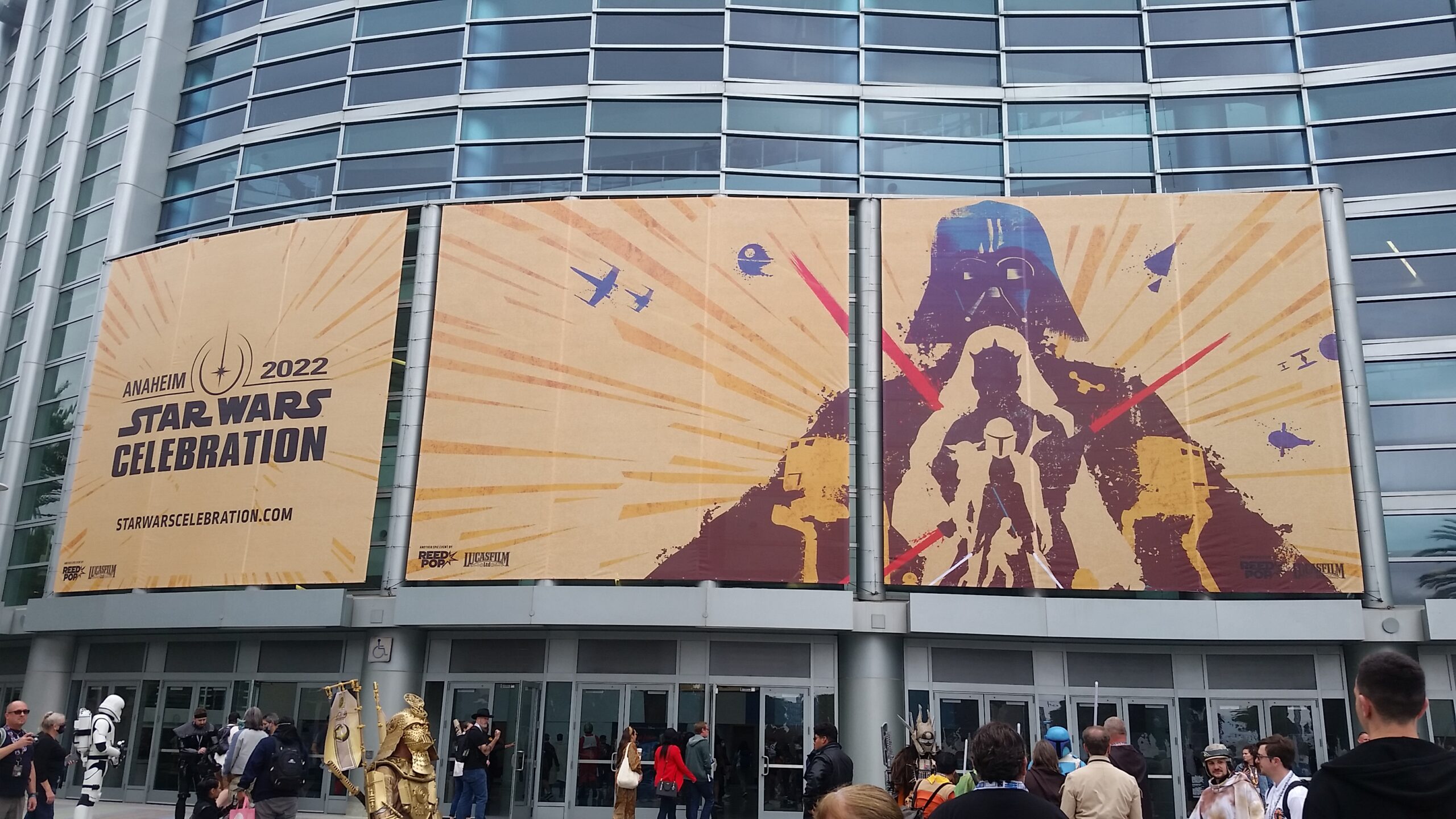 This weekend, after a two-year absence, Star Wars Celebration returned.  This is a convention that moves around the country and for it’s return it came back to the Anaheim Convention Center.  Again on a limited budget, we only had tickets for Saturday, but what a Saturday!  By the time we got there, there was already a couple of hundred people waiting in the stand-by line to get into the main stage in the Arena, which, if you are familiar with the Center, it’s the tortoise shell shaped building.  Ironically, it was used as a location in, “Star Trek: Picard”, so they were holding a Star Wars Convention in a Star Trek Building.

The Celebration stage was an open area in the exhibitors hall.  This is where they held the interviews of the cast and production crews of the various Star Wars streaming shows, and news about video games, etc.  The convention streamed the events from this stage on YouTube, and with Star Wars Meg covering the news on the main stage, we didn’t feel we missed anything.

When we got there, they sent us through a health check to look at our our vaccination cards.  Now I felt sanitized for your protection.  Then it was into the long lines for security.  I wasn’t sure if I was at the Convention Center or Disneyland next door. 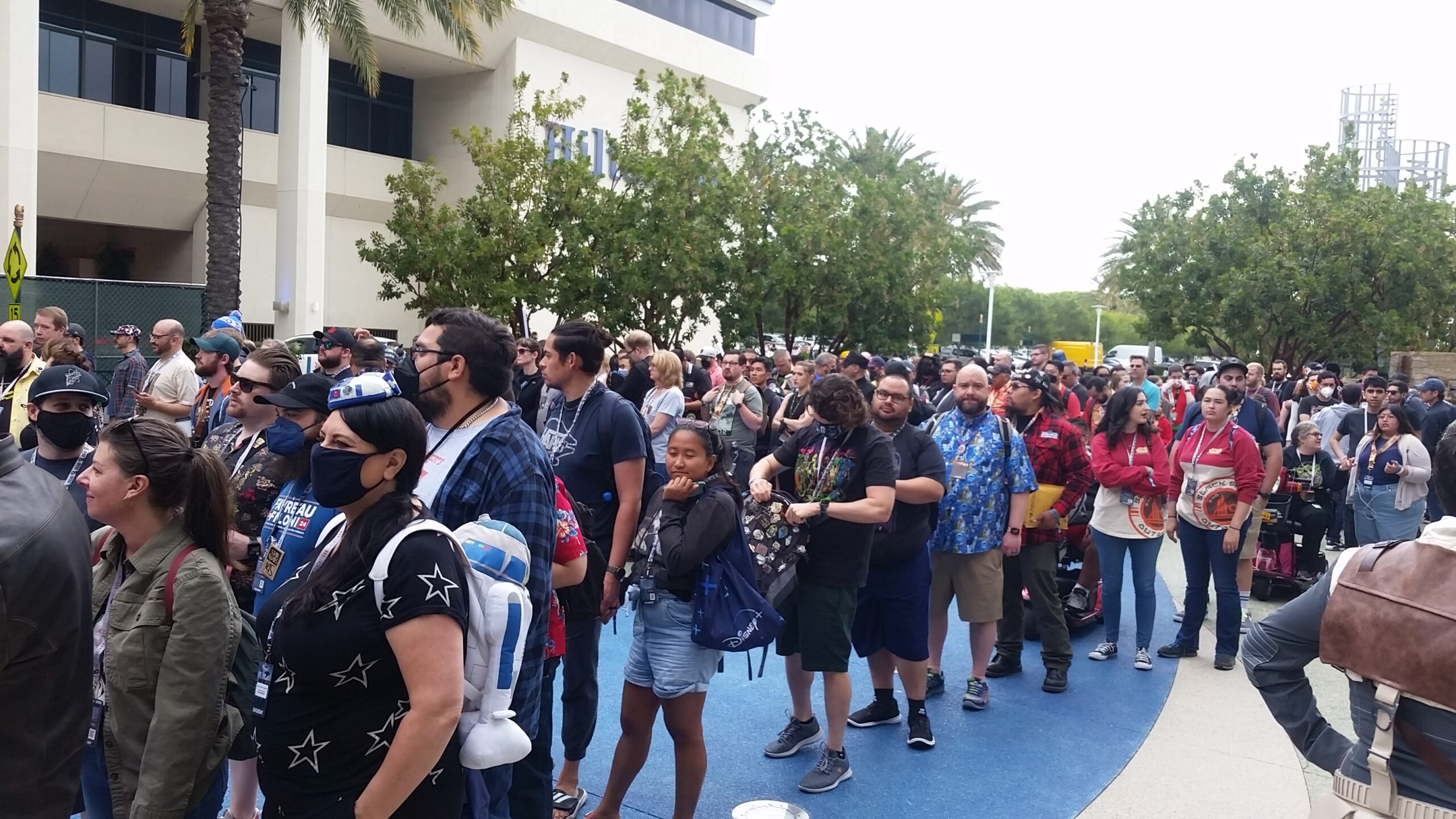 But even in line, we were alrady seeing some great costumes. 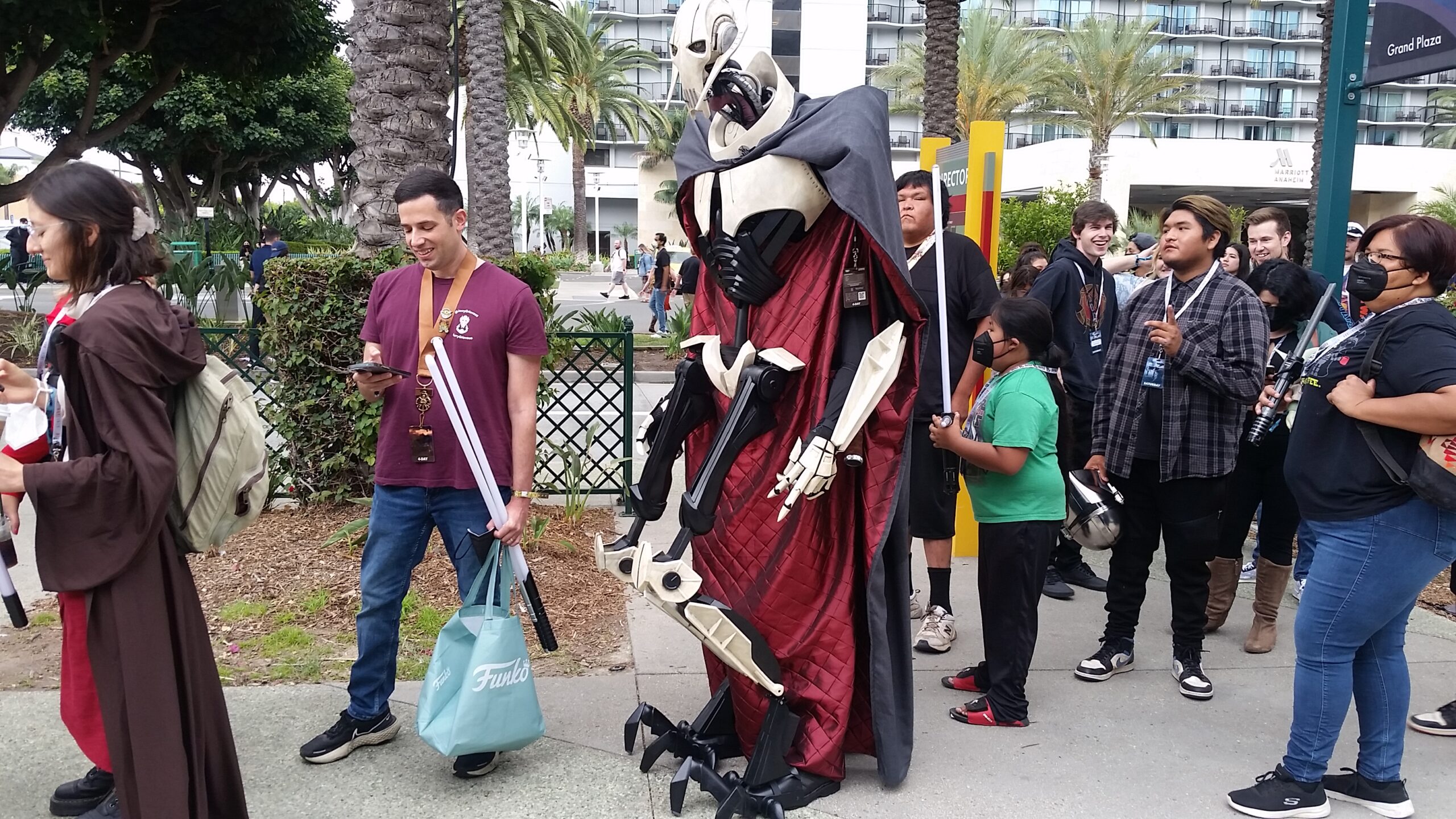 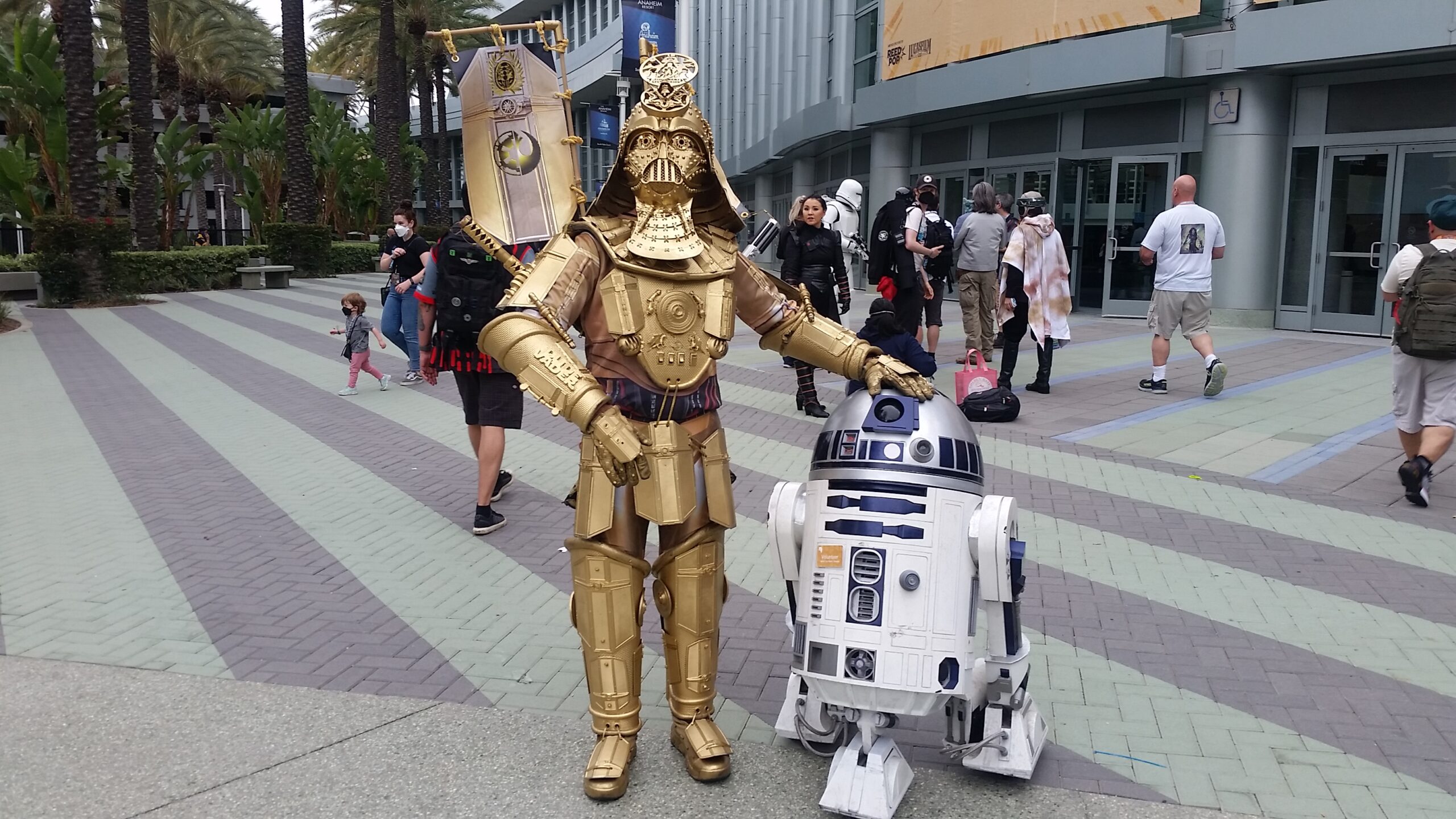 Pardon me, is this the way to the wheelchair races? 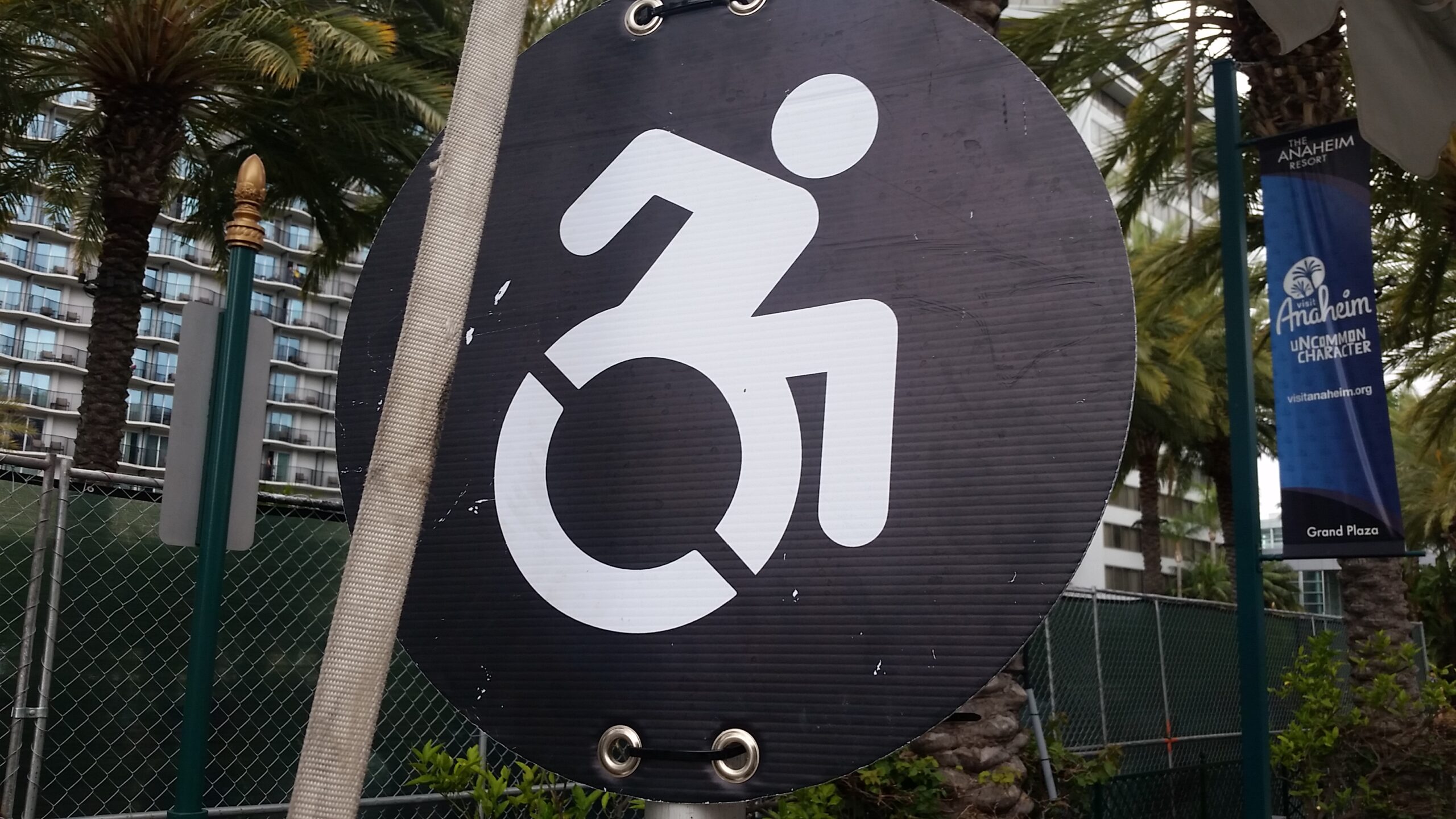 The way from security to the Convention Center was lined with food trucks. 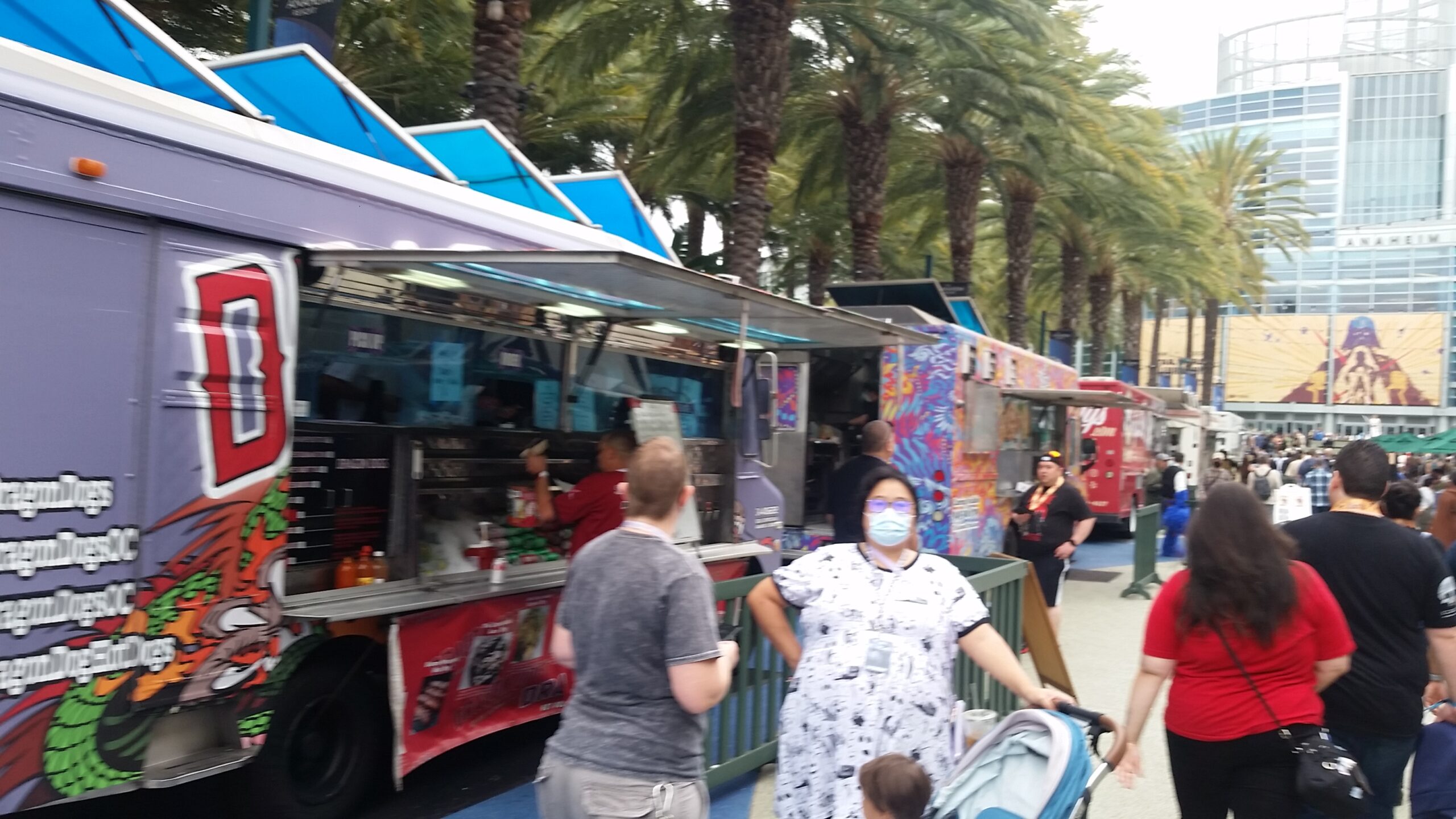 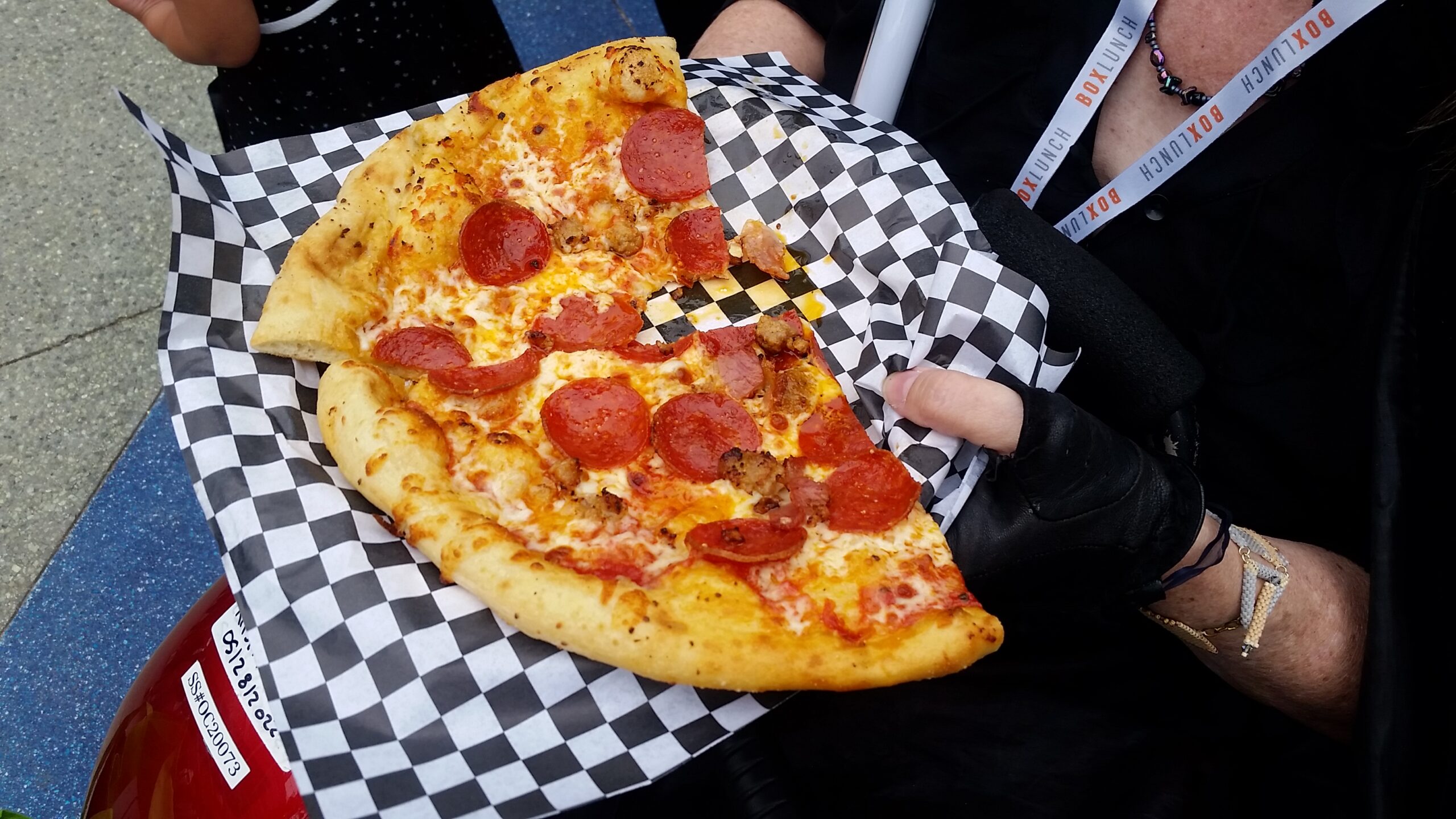 But this is not a food blog (for once), so let’s move on.

Inside there were many options for photo ops, like this life-sized T.I.E. Fighter: 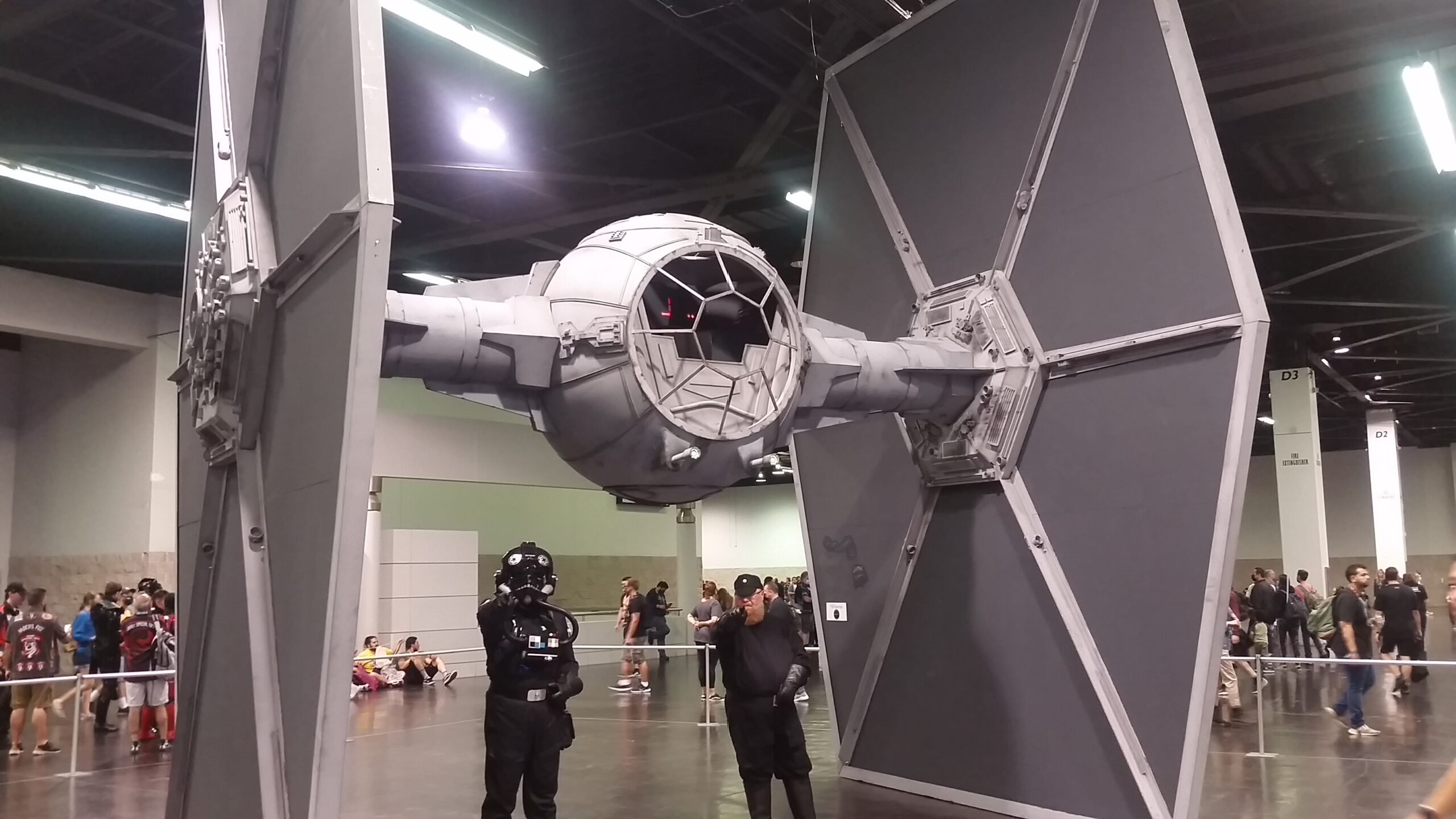 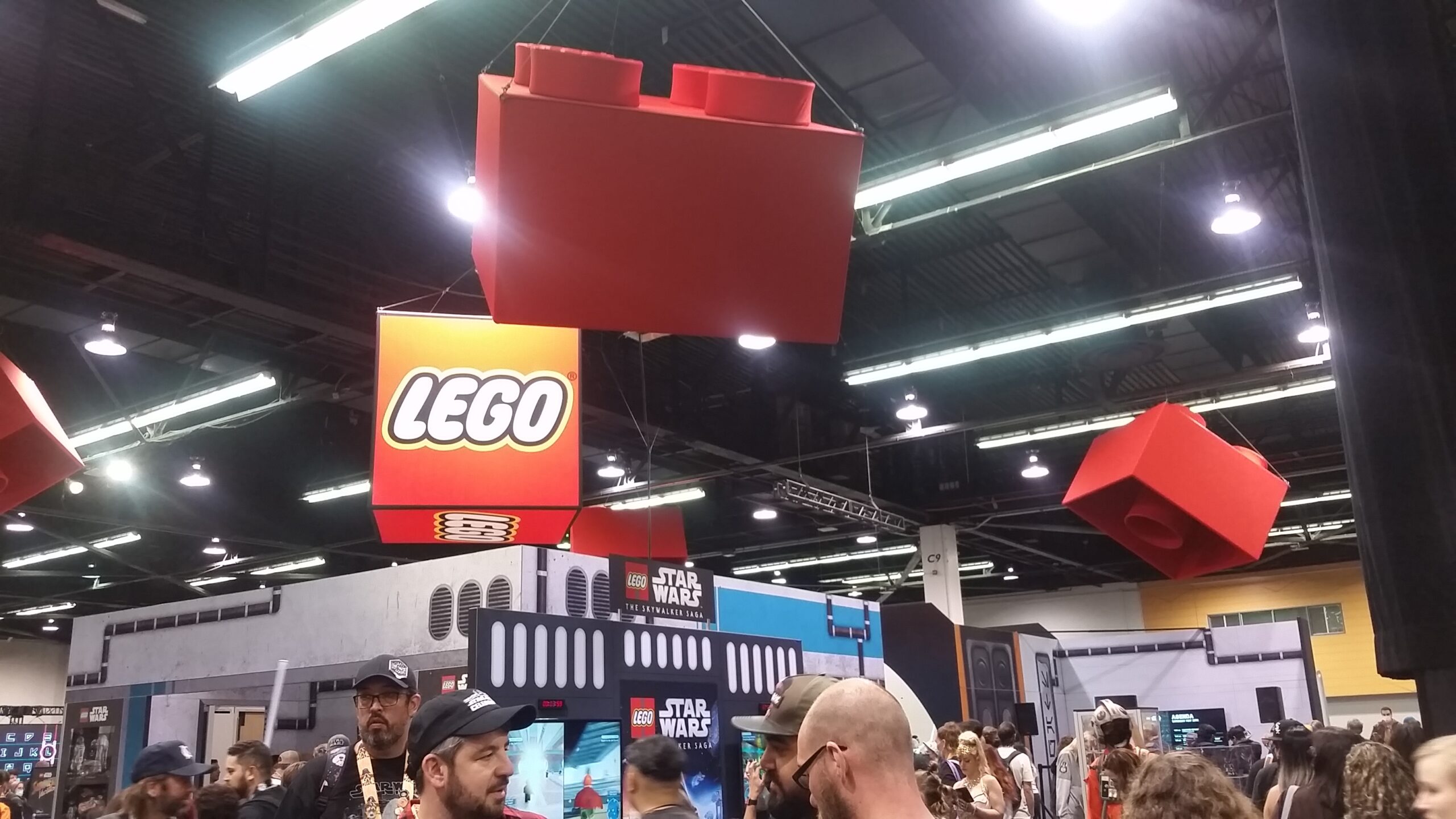 They also had some great murals… 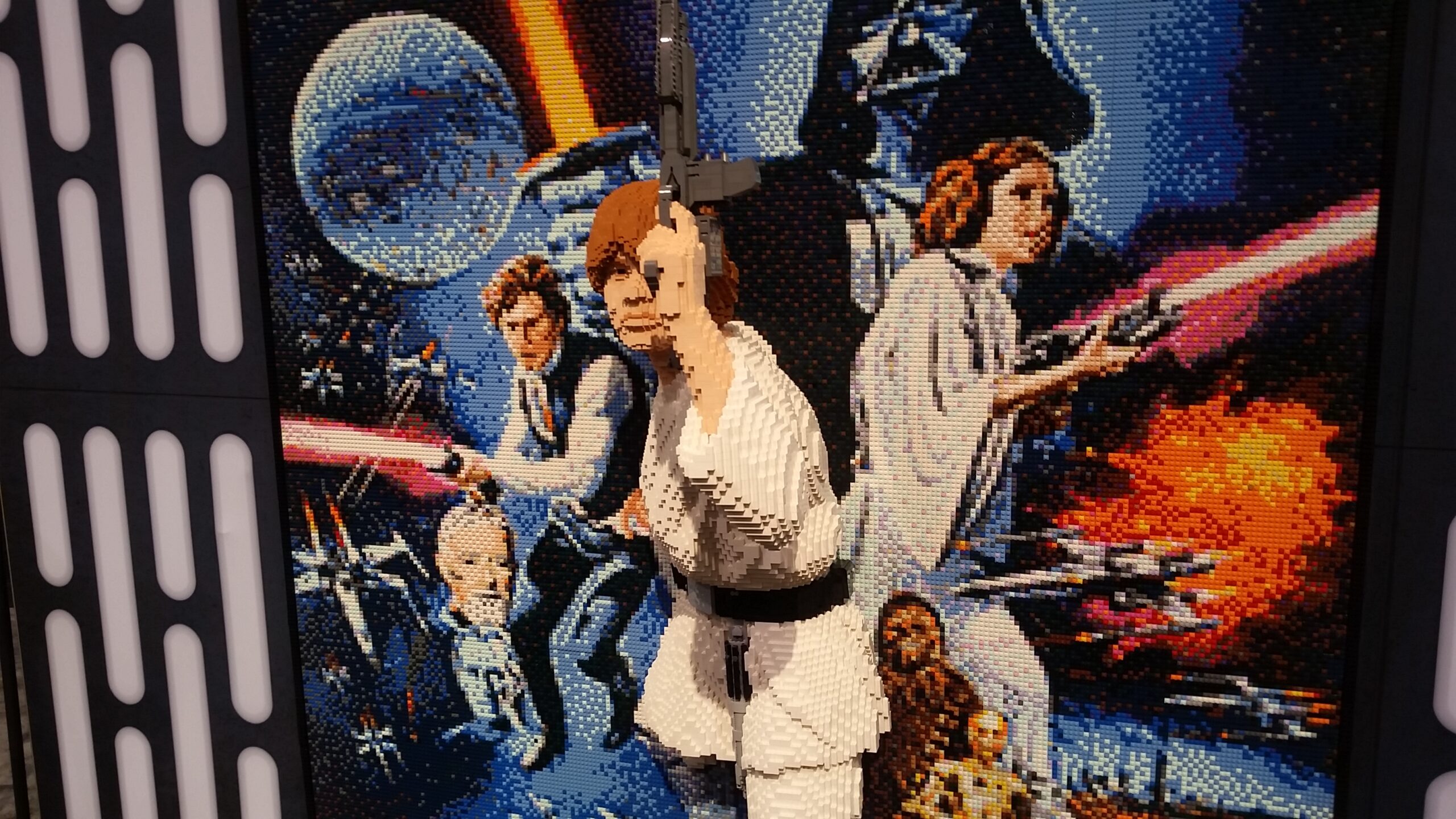 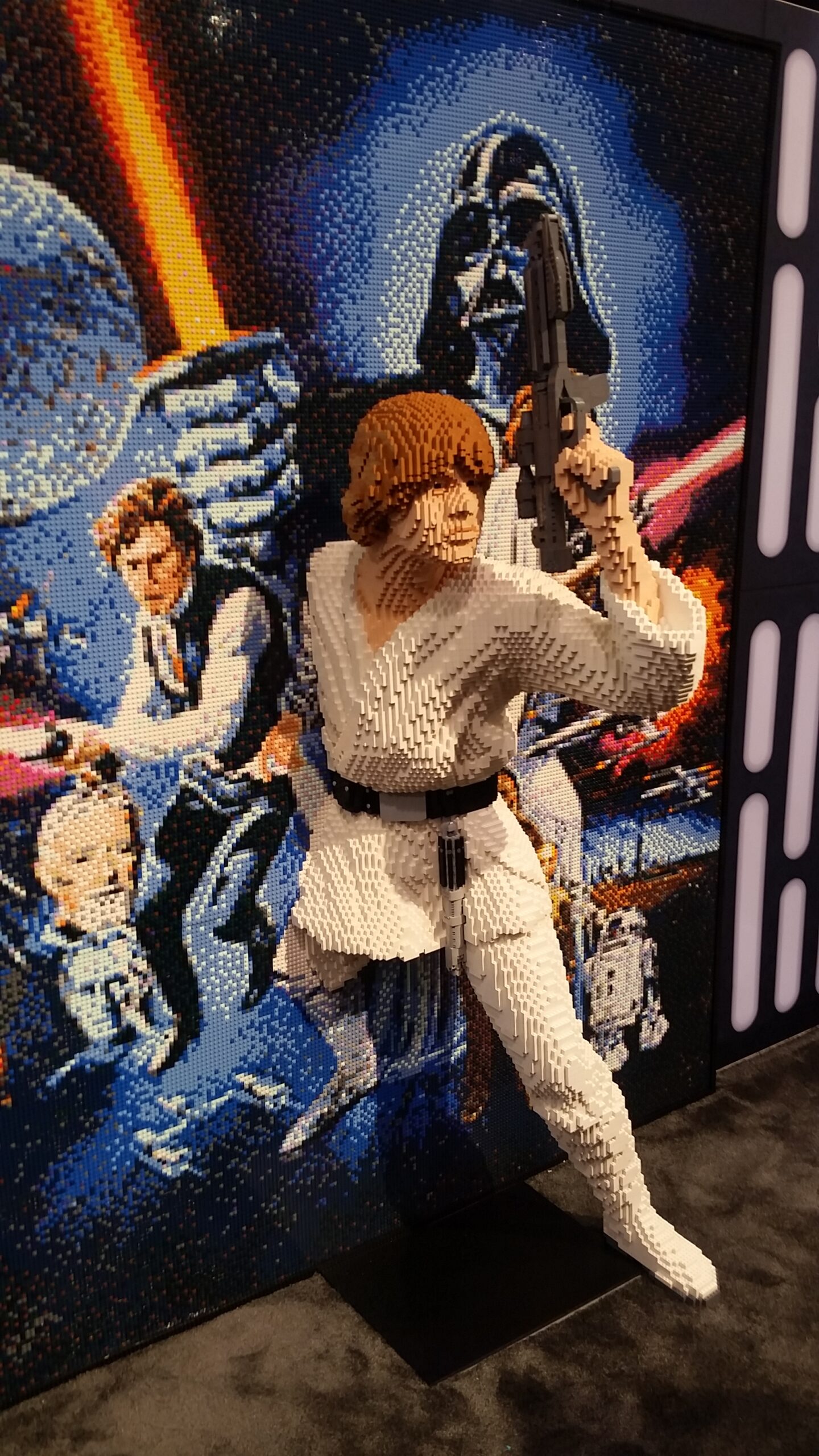 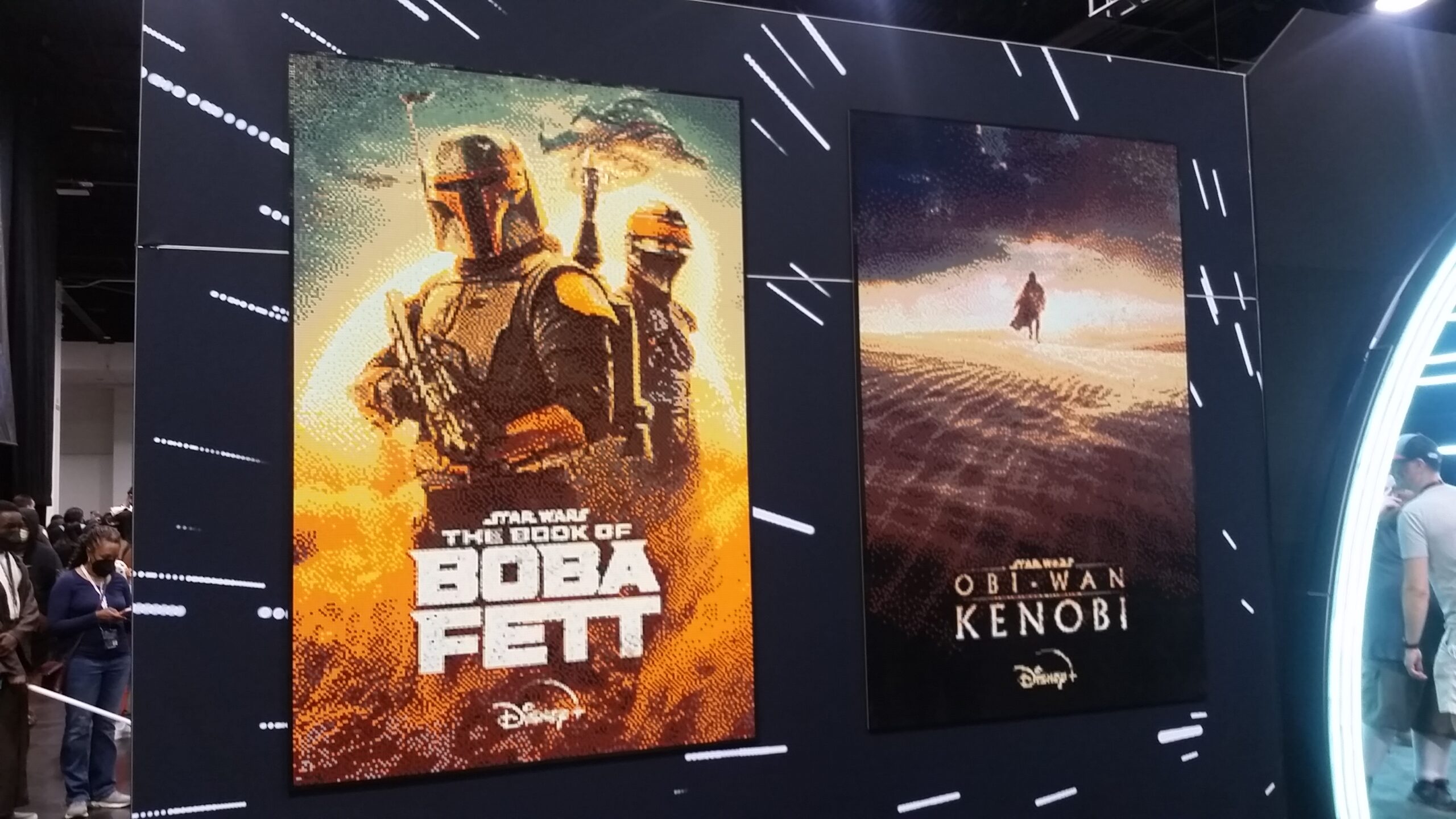 Throughout to con there were gatherings of various costumers… 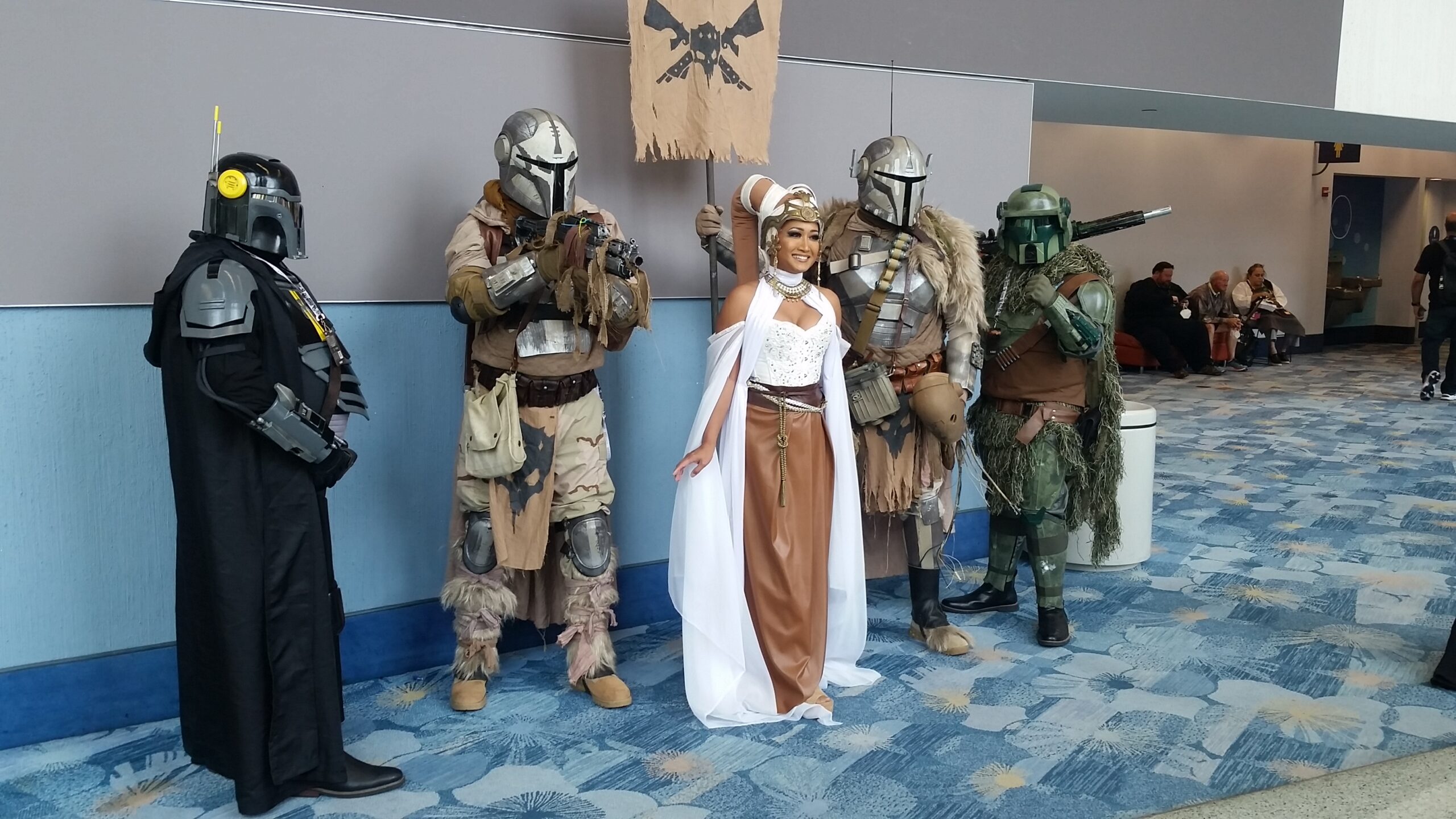 Twiliks are great in that they come in so many different colors.  Costumers can get really creative…

Wait a minute, isn’t that kind of like Equestria Girls??? 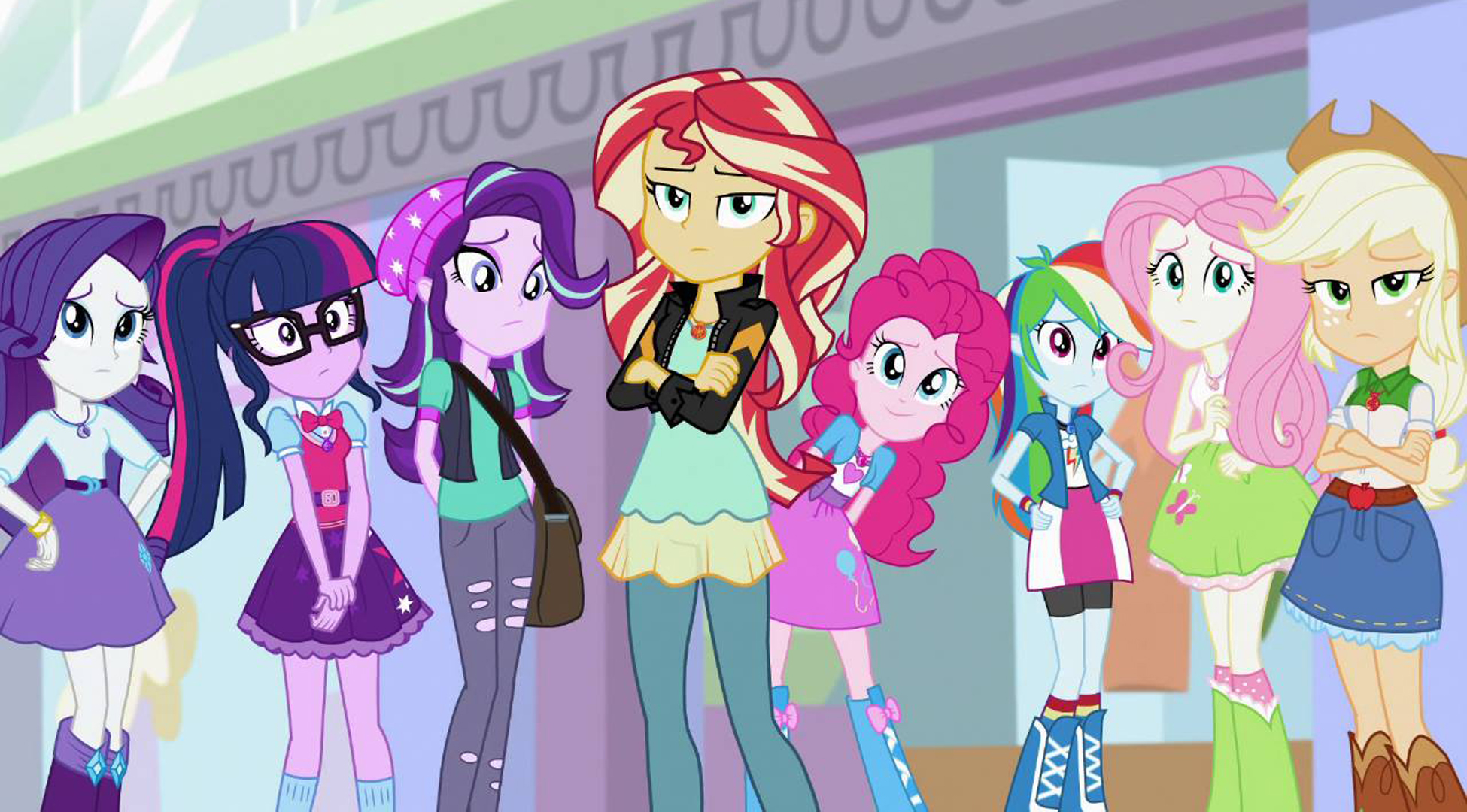 And just how do you grind coffee conscientoiushly? 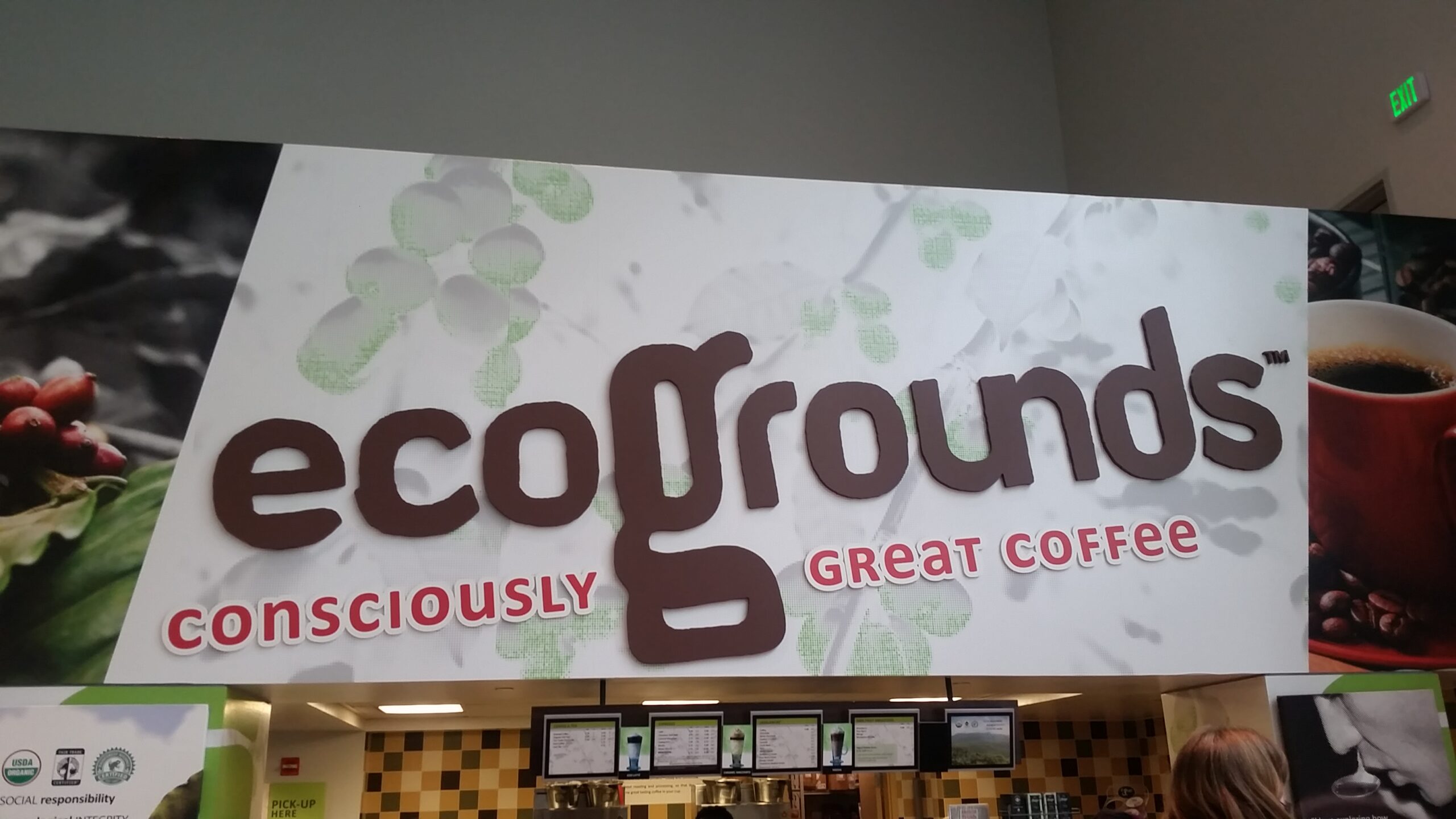 Do you grind beans that want to be ground?  Like cows that want to be eaten?  “Hello, I’m the dish of the day.”  “I’ll just pop off and shoot myself in the head.  Don’t worry, I’ll be very humane about it.”

Along the way, we ran into some friends.  From left to right, Michelle Pincus.  She was our guest liazon at Loscon when we were Fan Guests of Honor last year.  Genny Miller and Craig Miller, author of, “Star Wars Memories, my time in the (Death Star) trenches”. 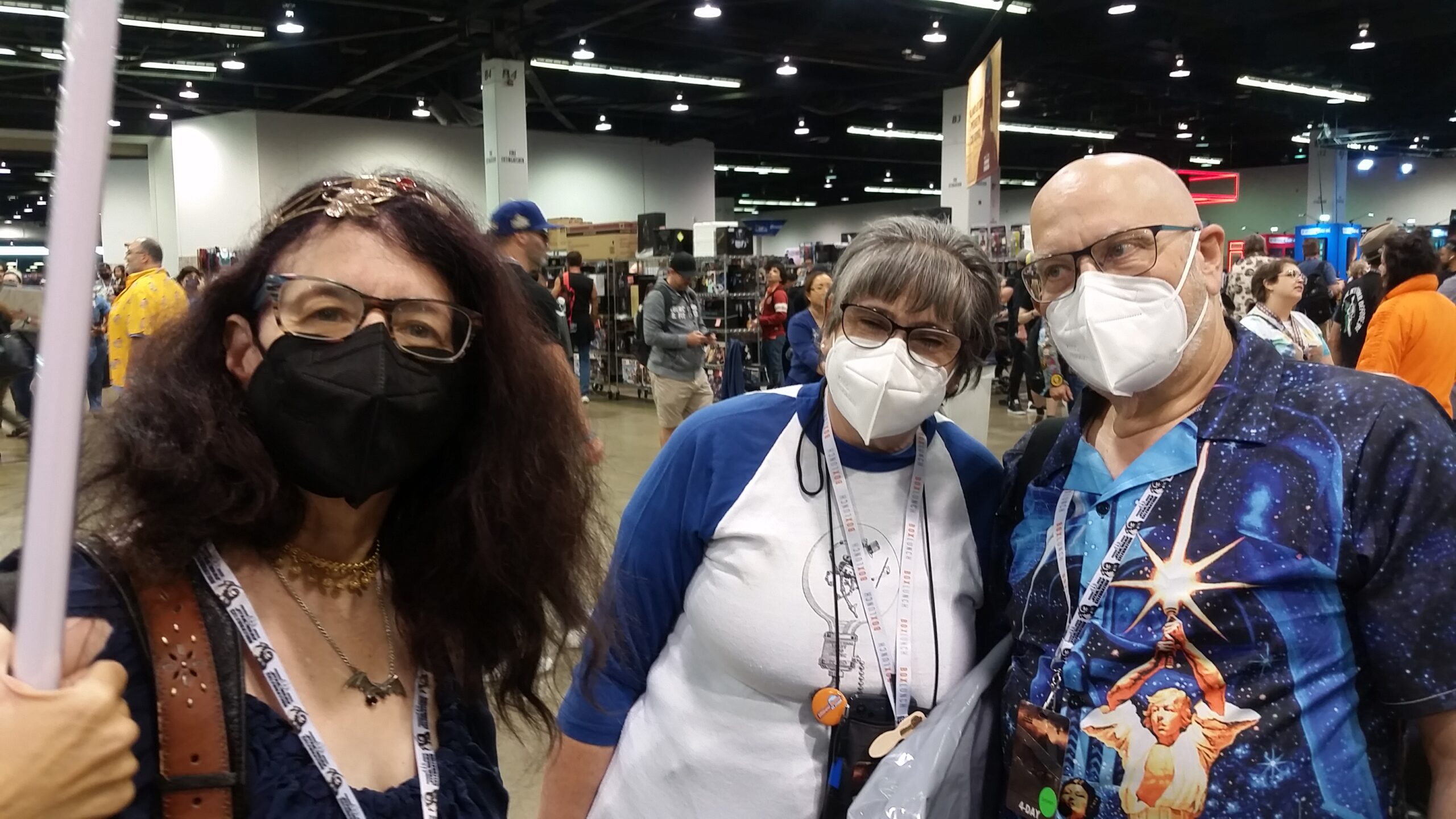 And the there was the Mandalorian Experience.  On the first day Dave Faloni said that had brought some props and we could go down and see them.  This was his idea of “some props”…

This alone was worth the price of admission.  If I put up all the pictures I took at the con, I’d be here till Thursday and blow up WordPress.

And the convention spared no expense for signage… 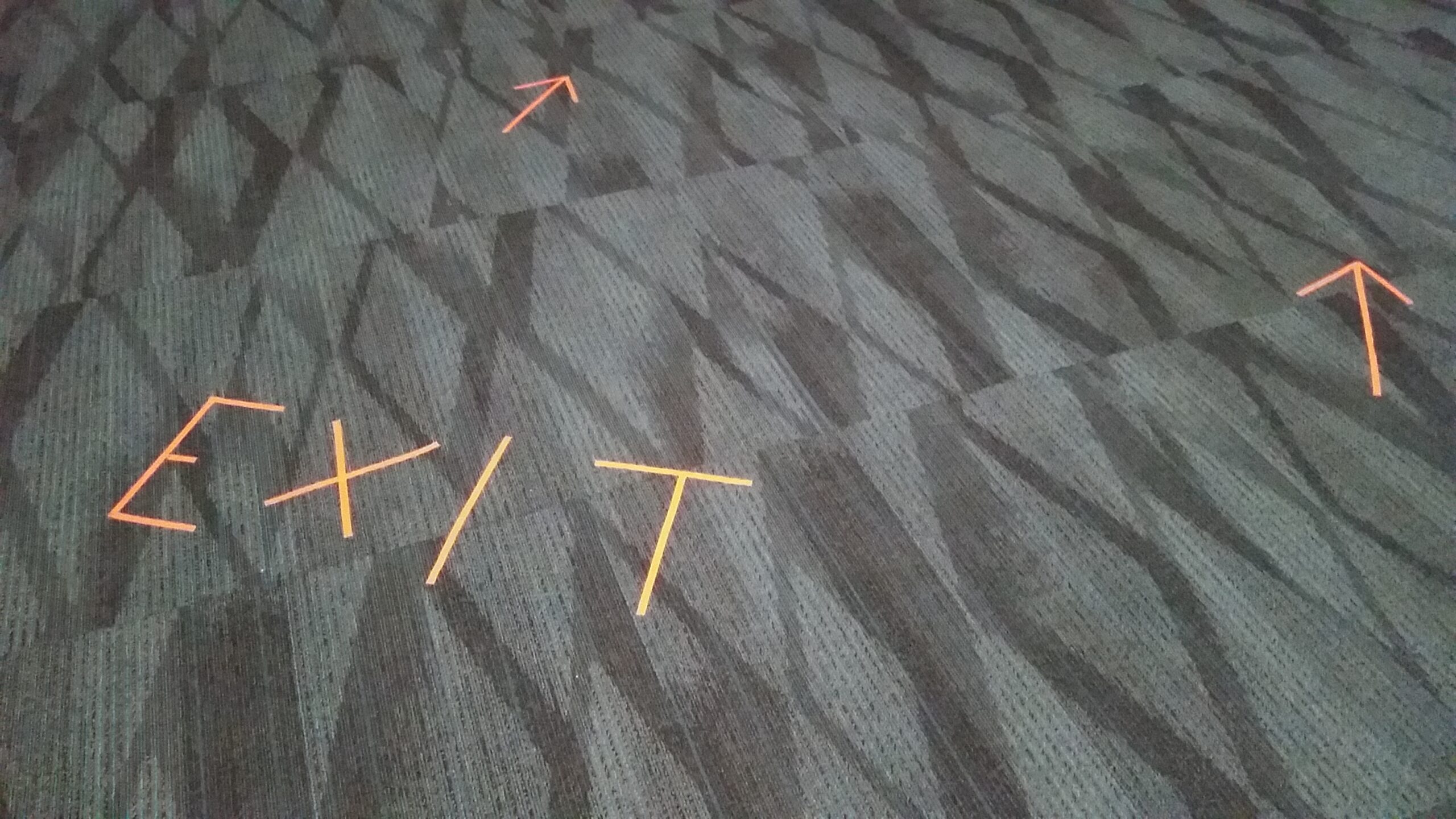 It was a great day.  I wish we could have been there for the whole con.

I also took some video.  So next week… VIDEO!

Second Steampunk screenplay:  173 pages.  <– Went down by one page.

I don’t know what I said to Kris to make her mad, but I’m glad Michelle was there to block her light saber.