Though my interest in writing is novels and screenplays, I have also written a few articles for Krypton Radio.   This particular one was not published, but it was a heck of a lot of fun to put together. Since I’m currently writing a steampunk trilogy, I had been anxiously waiting to attend my first steampunk convention. Fortunately, there was one in nearby San Diego, CA.

Science and Fantasy conventions generally cover a spectrum of many interests. Occasionally, one of those sub interests grow large enough to sustain its own conventions. We saw this a number of years ago with Anime. Within a decade, anime went from being a niche interest to holding its own conventions, such as Anime Expo in Los Angeles which now rivals the size of San Diego Comic Con International.

Steampunk is the newest of these breakout genres. Still in its infancy, steampunk conventions have only been around for four or five years. My wife and I (Time Siren and the AFLO Husband of the Corsair’s Closet) recently attended Gaslight Gathering 4: A Martian Holiday in San Diego, California. What struck us most about the convention was the newness and the freedom. Not just because we are new to the genre, but because of an overwhelming attitude of freedom in the expression of the genre. As one badge ribbon puts it, “It’s not steampunk to say ‘That’s not steampunk’”. In other words, there are no rights and wrongs in doing steampunk, either in costuming or writing. Though it’s set mostly in the Victorian Era, it doesn’t have to be. It can be straight scientific speculation of a future that never was, or it can include the supernatural. A costume can be historically accurate, but mostly you can fudge it to fit your persona or narrative needs. You won’t find any costume Nazis here. As panelist Diana Vick put it, “Steampunk needs historical accuracy like a dirigible needs a goldfish”.

The main goal in doing steampunk is to have fun, and this con was full of fun from start to finish. It’s a relatively small con, about 400 members. Everyone was very friendly, laid back, and the con staff bent over backwards to keep things running smooth and problem free.

It’s been a long time since a con offered more panels than I could possibly hope to attend. The good news was that some of the major panels were repeated to give you a second chance. Here is an overview of the panels I attended:

Steampunk 101: The basic feel of steampunk is that it’s more freeing and more fun. About 90% of the members were in costume. And since there is a lack of steampunk on the big screen or TV, everyone is making up their own character. So there is no one to tell you you’re doing it wrong. The entry level of costuming is also lower than other cosplays. I bought a Dickies (mundane brand name) airship shirt, tan cargo pants and I was in. Add a top hat, goggle, etc. and you’re on your way. As one panelist put it, ”It has a more welcoming nature; more love than other nerd cons.”

Recovering a Parasol demonstration:   This was one of a myriad of maker (prop/costume piece) demonstrations. The panelist demonstrated a method of recovering a parasol that solved endless headaches for Time Siren. She even got a chance to show the panelist her Bohemian Dreams parasol which he grabbed gleefully and showed everyone as a comparison to his maker models, commenting how beautiful hers was! There were twenty four different maker panels in all.

Researching Before Writing: The Devil Is in the Details: One of the best pieces of advice was to find an expert to ask about what you need to know. Experts love to talk about what interests them. Then you have to figure out what to keep and what to throw away. How historically accurate should you be? It all depends on narrative convenience.

Basic Steampunk Archetypes: This covered all types of characters from adventurers to zombies. From what they might wear to what equipment they might carry. Are they aristocratic or paupers?

Friday Night Concert: This featured live performances from Professor Elemental, Fishtank Ensemble and Poplock Holmes. Poplock Holmes started with a song about the recent newsworthy event where a group of local steampunk cosplayers were thrown out of a shopping mall. All the steampunkers wanted to do was ride the carousel in costume. The mall had had some recent problems with some vampire cosplayers and did not trust anyone in costume, hence the harassment.

How to Create a Steampunk Persona: The take away here was to create a persona close to your own personality. It will be easier to stay in character and will be more fun in the long run.

Zeppelins in Combat: This was a fascinating historical panel presented by Gordon Herman of the San Diego Air and Space Museum. It followed the history of zeppelins in battle from the Civil War to World War Two. I took more notes on this than any other panel. The thing that struck me most was that Ferdinand Count Von Zeppelin died-broken hearted. By the end of the First World War, his invention that he created for peace became a war machine that became known as a baby killer.

Adding Science and Whimsy to Your Costume: The funniest thing to note here is that we think of the period as being very elegant, when in fact, the Victorians had no taste in fashions! It was a period that new color dyes were being created. They would wear oranges with purples with new colors that don’t exist in nature. We don’t realize this because all the pictures we have of the era are in black and white.

War of the Worlds USO Dieselpunk Ball: This featured live swing music performed by High Society Jazz Band of San Diego. It was the most fun and energetic dances I’ve been to in a long time.

Seven Stampunk Fallacies: Too many funny stories to count. But here is the list: 1) Steampunk is anything you want it to be. No, there are guidelines. 2) Steampunk must have “punk” in it. “Punk” being chaos, anarchy, fighting against the machine, etc. No. What you are doing is punking history. 3) Victorian recreation is all you need. No, it’s just a start. 4) You must make it all yourself. Really? Did you make your underwear? 5) Well, my props really work!: You mean it blinks and spins and make noises. 6) If it’s not metal it’s crap. You try carrying around a fifty pound ray gun for a day. 7) Never wear goggles, everyone wears goggles, so you shouldn’t. And it’s converse: It’s not steampunk unless you have goggles. 8) Disney doesn’t do steampunk. Every heard of 20,000 Leagues Under the Sea? When it comes to steampunk, Disney built the boat! 9) Steampunkers take themselves very seriously. Obviously, people who think this have never been to a convention. And finally, obviously the panelist couldn’t count.

Airship Ventures, A Zeppelin Ride in 2012: Up until 2012 there was an airship you could ride in San Diego. The flight was about an hour long and cost about $400.00 per person. It was larger than the Goodyear blimp and held a crew of two and twelve passengers. The company, Airship Ventures, still operates in Germany.

Airships Over San Diego: A historical look at Airships used by the U.S. Navy and Air Force used through the 1930s. Some interesting facts: The Navy started using helium instead of hydrogen. While helium won’t ignite, there is a 22% to 30% loss of lift. Zeppelin is a brand name for a dirigible, like Kleenix is a brand name for tissue. A dirigible has a ridged frame with gas bags in it, and a blimp has an elastic covering. Both dirigibles and blimps are airships. They can be controlled. A hot air balloon cannot be controlled, hence, is not an airship.

Overall it was a fun, exciting and educational weekend set in a beautiful and casual hotel. Next year the convention will be held in September, no specific date set yet. For the latest new, visit www.gaslightgathering.org or visit their Facebook page. 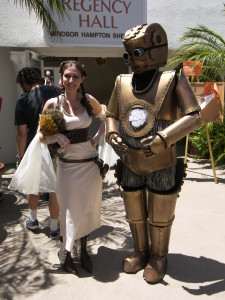