There’s GOLD in them thar hills! 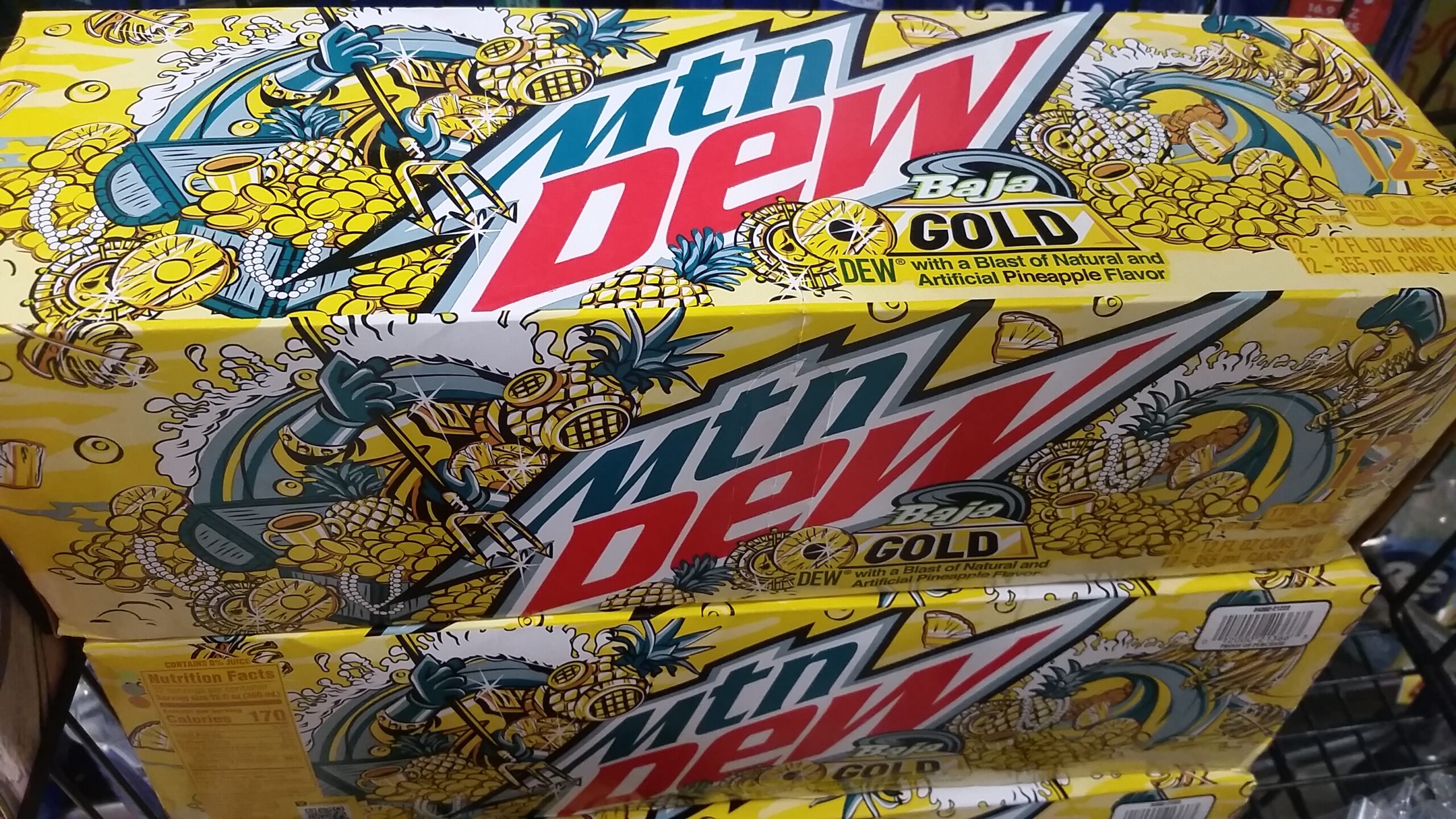 Well, Mountain Dew Gold to be exact.  Pepsi has been releasing a whole bunch of Mountain Dew flavors lately, some for a limited time.  So, being a Mountain Dew man, I had to hunt them down.  No supermarket or convenience store has all the flavors, and some are exclusive to some stores or restaurants.  But https://www.mountaindew.com/ has a Dew finder https://www.mountaindew.com/mtn-dew-flavors/ .  Just click on the Dew you’re looking for, put in your zip code and it will tell you the nearest store.

Sometimes it’s wrong, or maybe they were just out of that flavor, but I was looking for Mountain Dew Gold and found a variety of flavors at a Ralphs in Moorpark. 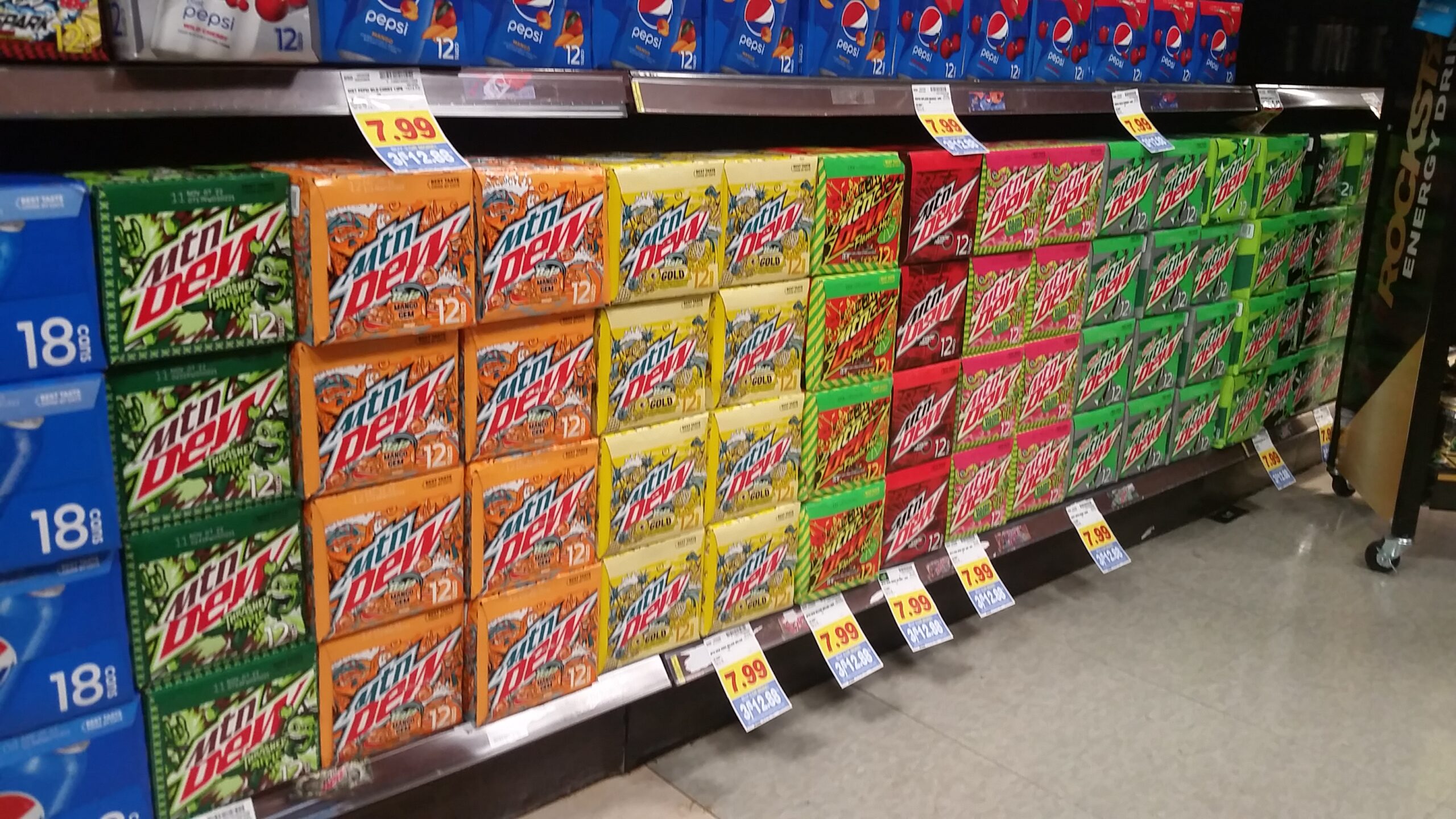 And Kris found a variety of bottled Dew at City Market on the corner of Nordhoff Street and Canoga Avenue here in the San Fernando Valley. 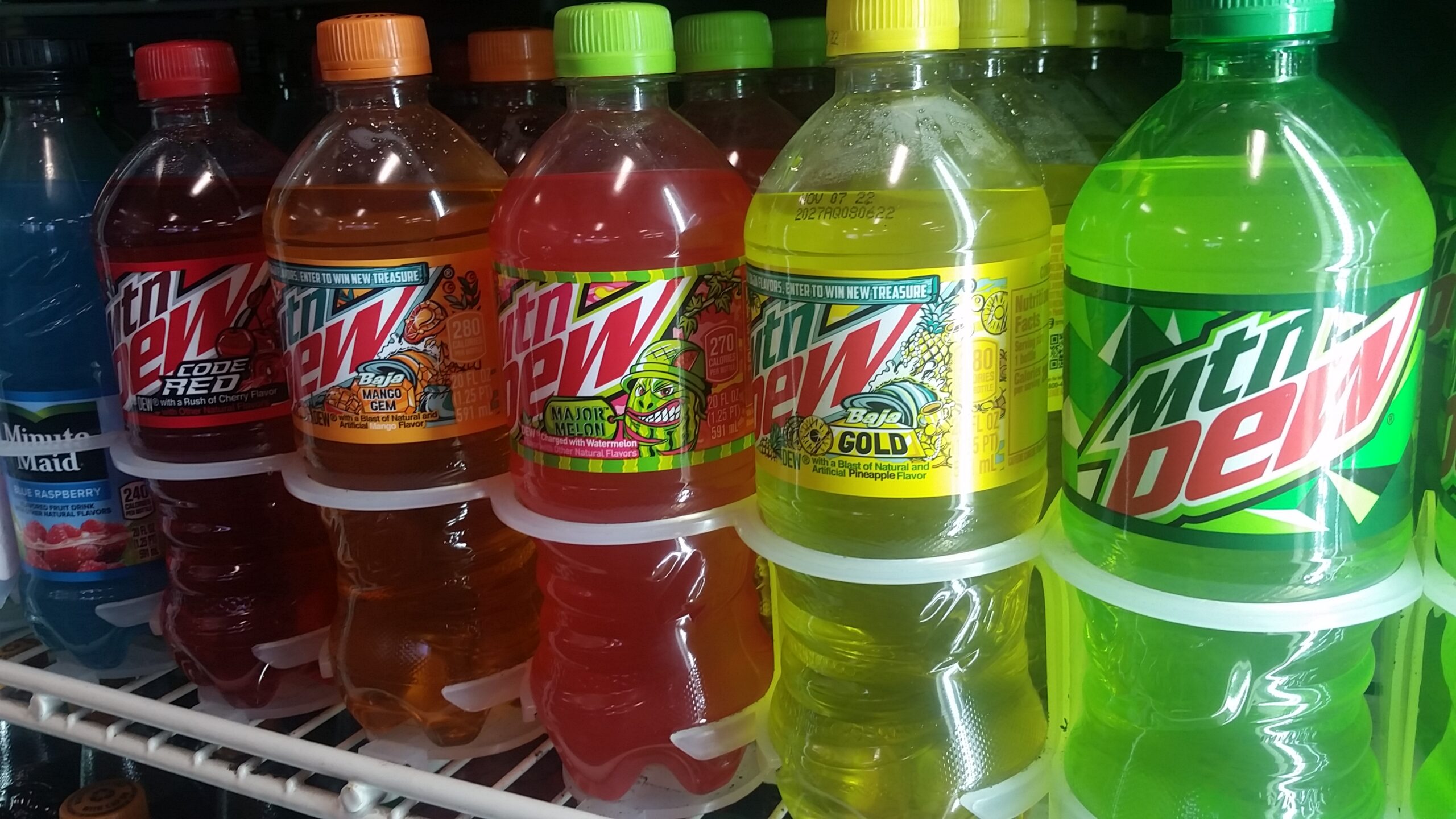 Some are great, some not so much.  I’ll let Vincent Reinheart, the culinary critic of the Cherry household, break it down. 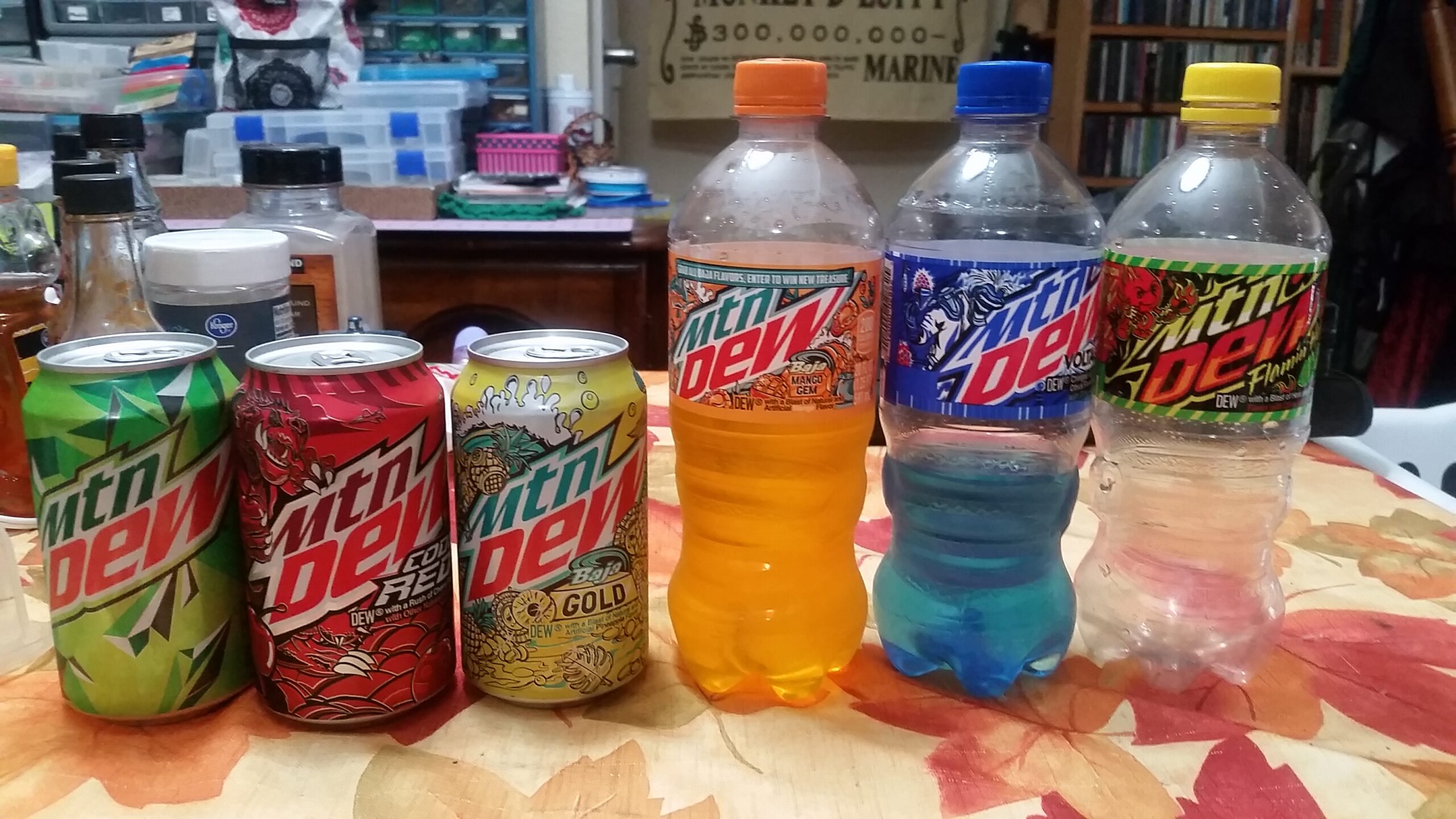 Mountain Dew, the original:  Well, not quite the original.  Mountain Dew Throwback with real sugar is closer to the original – and that sometimes is out for a limited time.  But nothing beats a Dew!  Dennis says that Mountain Dew and Snickers got him through a lot of late nights editing his student films.

Baja Blast (not pictured):  You can sometimes find this in an Icee version at Taco Bell, but in bottles or cans for a limited time only.  Worth getting or a trip to Taco Bell.

Gold:  Code Red has been around before, but Gold is new.  It’s pineapple flavored.  Kris isn’t a Mountain Dew Woman (often calling it Bantha piss), but she did enjoy this flavor.  I consider it up there with Code Red.

Mango Gem:  To quote Kris, “Mango is too strong for me, it’s like, ‘I’m MANGO!!!  OH AND, YEAH, I’M A LITTLE BIT DEW, TOO!’”  I did not find the flavor quite as strong, to me it’s about as strong as the pineapple flavor of Gold, but I do prefer pineapple over mango, so, good, but not my favorite.

Voltage:  “Charged with Raspberry Citrus Flavor and Ginseng”.  The ginseng seems to overpower the raspberry, and I’d rather have the raspberry flavor.  So, just okay. Kristine did say she likes it, though not as much as the pineapple Gold.

Flamin’ Hot:  No.  Just, no.  You take a sip of cool soda and get a blast of hot up your nose.  Not what you want in a “refreshing” drink. Or any drink.

Also not pictured, but worth mentioning:

Ginger Snapped:  Out last Christmas.  It had gingerbread men on the label, so we wondered about the flavor.  But actually, it was ginger ale flavored Mountain Dew and it worked.  We hope it will be out again this Christmas.

The last flavor I’m looking for is Livewire, their orange Dew.  I haven’t seen orange Dew in at least a decade, but I remember it was a great orange soda.  Orange is one of those flavors that is hard to get right, but this one was the best, better than Orange Crush.  Supposedly Walmart has it, but only in 2-liter bottles.

Second Steampunk screenplay:  165 pages.  <– My critique group gave me feedback on the first half.  Making some notes for potential changes, but waiting for them to read the second half and give me feedback on Wednesday before I really start.

The new 7-Eleven on DeSoto and Nordoff has Mountain Dew Slurpees. 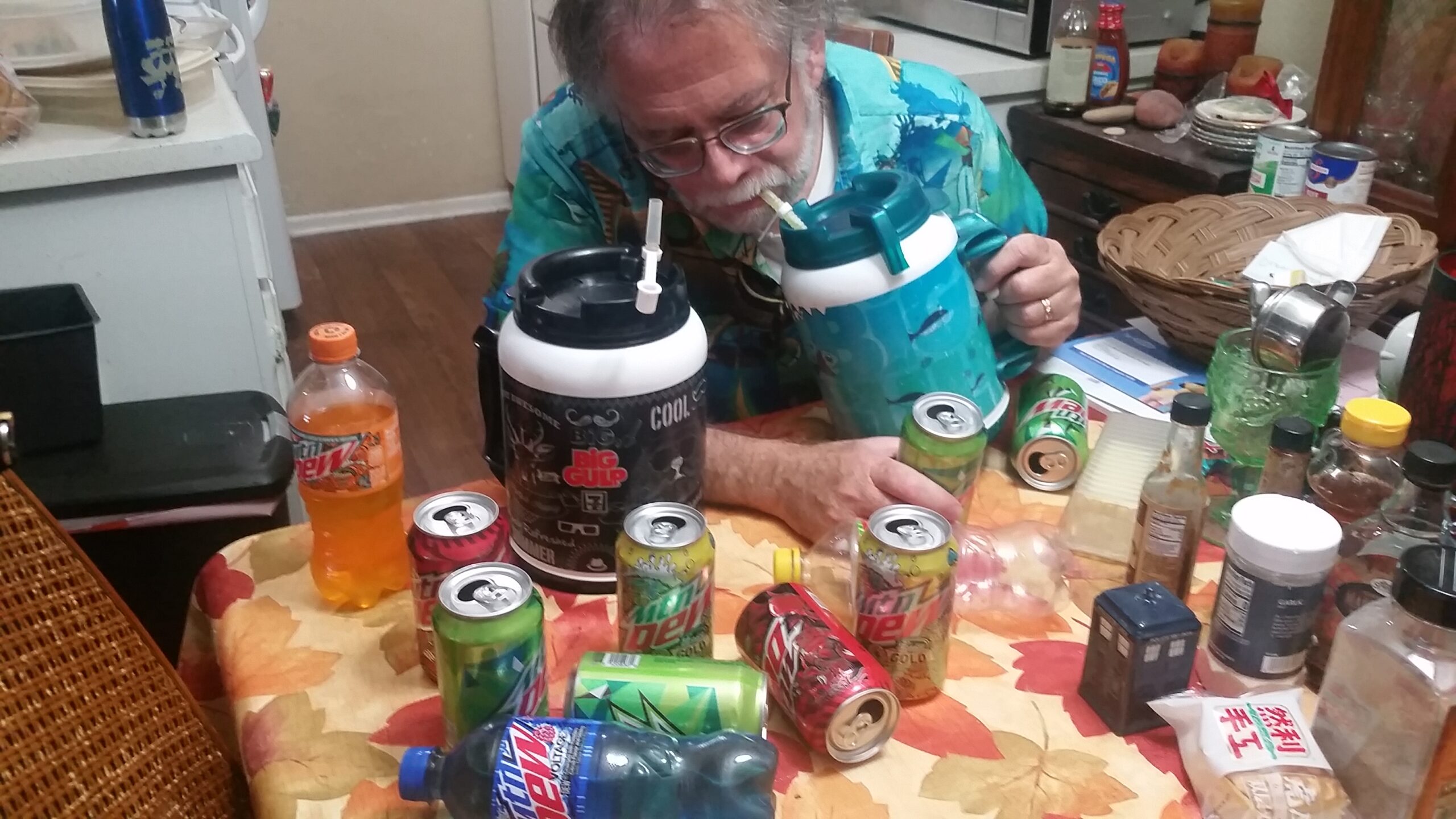 Kris says I may have a drinking problem.